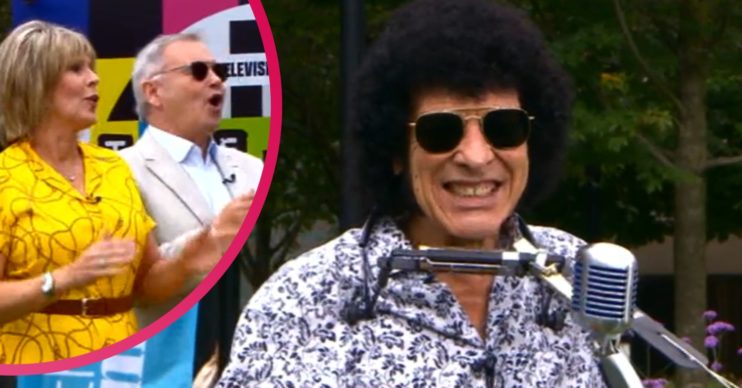 Eamonn Holmes' 'dad dancing' was a hit, though

This Morning welcomed Mungo Jerry on to the show today, but viewers were less than impressed with the performance.

Hosts Ruth Langsford and Eamonn Holmes headed outside the This Morning studios before Ruth said: “We’re going to transport you back to the summer of 1970, how old were you then, Eamonn?”

His wife asked him about the 70s, but more importantly if he had bought any records at that age. “I bought my first record then. It was In The Summertime by Mungo Jerry,” he revealed.

“Little did I think 50 years later I would actually meet the man who recorded it, Ray Dorset.”

Eamonn is a Mungo Jerry superfan

They then cut to Ray – aka Mungo Jerry – who was poised with his guitar ready to perform the classic track.

“Ray, absolute privilege and a pleasure,” Eamonn gushed over him.

The singer was still sporting his large black hair and he talked about the song saying it’s “a celebration of life.”

He did admit the lyrics were seen as “politically incorrect” in today’s society.

“People are saying it’s the most politically incorrect lyrics in the world, but that is just in the mind of the person that reads the lyrics.

“If I ask you if you want a drink, it doesn’t have to mean alcohol, it could mean tea, it could mean anything, but because it’s become a generic term, people automatically think alcohol.”

Superfan Eamonn said he was keen to get Mungo singing the song and in addition assured people at home: “This will get you feeling good.”

As Mungo began performing with his guitar and harmonica, Eamonn was bopping away in the background.

But it soon seemed like the singer had forgotten his words as he started mumbling somewhat.

What did This Morning viewers say about Mungo Jerry?

It didn’t take those watching at home long to notice the performance was seemingly a bit off.

Did #MungoJerry just struggle to remember the words to a song he wrote and performed 12 bajillion times live on #ThisMorning ? A performance so cringeworthy I had to hide behind a very large cushion #TVbronze #HaveAdrinkHaveAdrive #NotAgedWell #InTheSummertime

#ThisMorning ye’d think after 50 years practicing he’d have got better .. but yet..

#ThisMorning can anyone understand a word the man is singing.??

Does he keep forgetting the words??? #ThisMorning

@thismorning you have reached an all time low today with this has been Mungo Jerry.. how much worse can it get #ThisMorning

Eamonn’s dancing on This Morning was a hit!

However, Eamonn’s dancing in the background was a huge hit!

Viewers said it was certainly just what they needed to brighten up their days.

Loving @EamonnHolmes dancing on #ThisMorning definitely cheered me up this morning.

Some viewers were fans of the performance though. Above all they said they “loved” his performance and his was “pitch perfect”.

Brilliant Mungo Jerry ignore the haters losers they are… #ThisMorning

At least he was pitch perfect. Not many who perform live are. #ThisMorning

After the performance, Eamonn bowed down to him and thanked him saying: “Excellent my friend. Thank you for taking me back to being 10 years of age.”