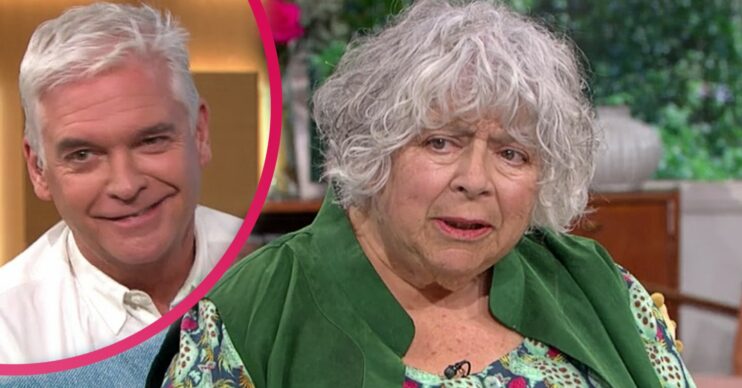 This Morning: Miriam Margolyes tells Phillip Schofield why she knew he was gay

Oh how we love Miriam

Miriam Margolyes tickled This Morning viewers when she told host Phillip Schofield: “I always thought you were gay”.

The 80-year-old Harry Potter and Call The Midwife actress returned to the show this morning (Tuesday September 7).

And it wasn’t long before she had everyone in stitches.

What did Miriam Margolyes say on This Morning?

Miriam came in to plug her new autobiography, and attention soon turned to her private life, which she discusses in the book.

Phillip began by asking her: “One of the things that you regret, which I thought was really sad when I saw that, is that you came out to your parents and then it wasn’t long after that your mum had a stroke.”

“I always felt guilty about that,” Miriam replied. “I mean you’ve been very brave, you came out.”

And then she said: “I sort of thought you might be gay when I met you.”

Phillip responded by chuckling and with a raised eyebrow said: “Did you?”

“Because you’re a bit camp,” the actress explained.

Miriam Margolyes asked Holly if she was camp on This Morning

“I suppose I’m a bit camp too,” Miriam continued.

Phillip said: “I think most people in telly are a bit camp if I’m honest.”

“I think they are,” Miriam replied before asking Holly Willoughby: “Are you camp?”

Holly said: “Completely. I hope so!”

Miriam to philip schofield "I always thought you were gay, you were very camp" #ThisMorning pic.twitter.com/LIjcNvM5Lw

“I always thought you were a bit gay” she just says it how it is, and I love it #ThisMorning

How did viewers react to Miriam’s comments?

Miriam Margolyes certainly livened up This Morning viewers’ morning, as they took to Twitter to comment on the exchange.

One said after dropping a gif of a man cracking up: “Miriam to Phillip Schofield ‘I always thought you were gay, you were very camp’ #ThisMorning.”

Another wrote: “Miriam to Phil: ‘I always knew you were a bit gay [cry-laugh emoji].’ She really doesn’t care what she says that is why I love her #ThisMorning.”

A third laughed: “‘I always thought you were a bit gay’ she just says it how it is, and I love it #ThisMorning.”