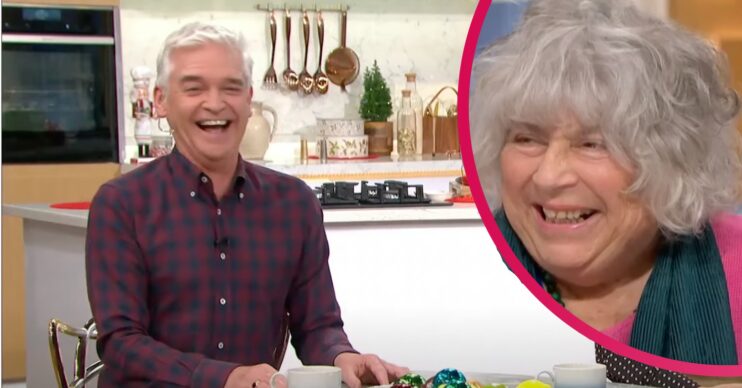 National treasure Miriam Margolyes had Phillip Schofield and Holly Willoughby in stitches after making a comment about Philip’s sex life on This Morning.

Miriam, 80, appeared on today’s This Morning (November 15) and was providing listeners with some advice.

In the section of the show called ‘Ask Miriam’, viewers phoned in and asked Miriam for her counsel.

The actress is well known for speaking her mind and not holding back, so this section was always going to be entertaining.

What advice did Miriam Margolyes give on This Morning?

Before the segment of the show began, Phillip said: “We don’t know if this is a good idea or not.”

“It’s the best idea we’ve ever had,” Holly replied causing both presenters to burst out laughing.

Viewers then began phoning in, asking the former Harry Potter star for advice on lazy husbands, growing thick skin, and confessing love to an office crush.

One viewer asked for advice on how to find love, giving Miriam Margolyes her time to shine.

What did Miriam Margolyes say about Phillip’s sex life?

On the subject of online dating, Miriam said: “I don’t know much about online [dating]. It’s not for me.

“But it’s what an awful lot of people I know are doing, and very happily. So maybe online is the answer.”

She then advised the caller to not do anything sexual straight away when dating, prompting a smirk from Phillip.

“I think you should wait for sex,” Miriam said. “I don’t think it should come immediately. It should be arrived at. Eventually. Not like you Phillip, but you know, sort of wait for it.”

This prompted even more laughter from the presenters, with Phillip protesting: “I don’t know what that means!”

Miriam Margolyes then said she didn’t know anything about Phillip’s sex life, she was just guessing.

This Morning viewers on Twitter were loving what they were seeing on TV and were quick to shower Miriam with praise.

“Oh, I love her! Gentle, kind, but honest,” one viewer wrote.

“Miriam is an absolute treasure,” another viewer tweeted.

Miriam had fans, and the presenters, in stitches earlier on in the show too after breaking wind just before recording started.

“Miriam’s just done the most enormous fart,” Phillip said, causing Holly and Miriam to burst out into laughter once more.

What did you think of Miriam’s appearance on This Morning? Leave us a comment on our Facebook page @EntertainmentDailyFix and let us know what you think.