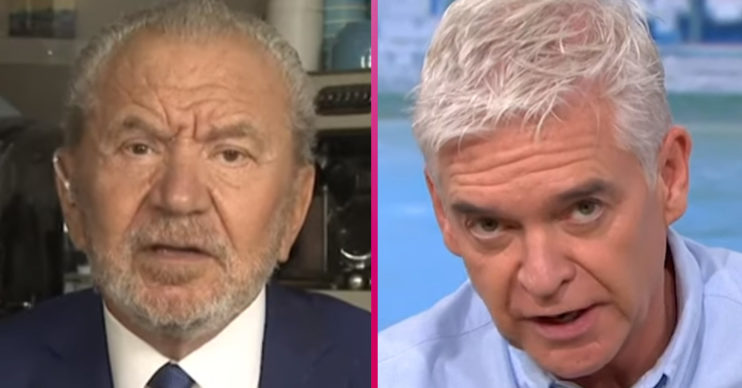 This Morning host Phillip Schofield got told off by Lord Alan Sugar on Tuesday’s show.

The Apprentice honcho, 73, appeared on the ITV show to demand British people head back to work.

Millions of Brits have been working from home since lockdown began in March.

But Lord Sugar has been very against working from home from the get go.

He has repeatedly ranted against it on social media – and claims WFH slows down productivity.

Taking his cause to This Morning, he made his case to Phillip Schofield and Holly Willoughby.

The Lord said: “Those people who still like working from home, I think have become complacent, to be honest with you.

“My business they have all come back. They are all working in my Loughton business there.”

But many viewers say they prefer working from home

He even hinted that Brits have been enjoying their time away from work too much – and simply must go back.

He continued: “There is a fine line of fearful or enjoying it, to be honest with you, it is as simple as that. What are they fearful of? My business, a load of people have been back for well over a month and I have a factory with 300 people in it who have been working throughout the pandemic.

“We have in place proper systems – temperature taking and all that stuff.”

Phil then mentioned the latest news that the World Health Organisation has warned the UK a second wave could be coming.

“I’m sick of tired of watching CNN, Sky, the BBC. All they do is cause panic amongst people. I’m not interested in any of that stuff.”

Meanwhile, his work from home comments have gone down like a tonne of lead over on Twitter.

Dozens of viewers took to the social media platform to lash out at the BBC Apprentice judge.

One viewer alleged: “#alansugar ‘s main concern is his commercial property portfolio. If people dont go back to offices he is going to lose a LOT of money. Greedy little goblin. #thismorning.”

Another user complained: “Yet another monolith and old school manager that clearly doesn’t provide trust or a work life balance. #thismorning #alansugar.”

Others agreed, with one writing: “Well said @Lord_Sugar on #ThisMorning.”

Another added: “I’m with @Lord_Sugar – he’s spot on regarding the coronavirus and the need to get people back to work.”