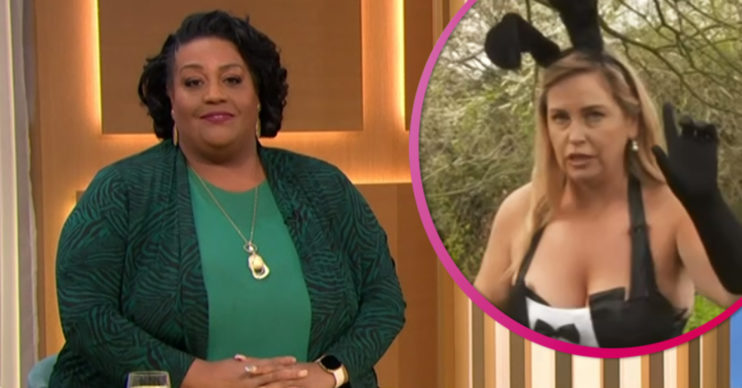 Viewers were divided over Josie's outfit

This Morning star Josie Gibson wore a racy bunny outfit on the show today and Alison Hammond jokingly told her to change.

Josie appeared on Friday’s show (April 2) to mark the Easter weekend and sported a bunny outfit.

However, Alison and Dermot O’Leary looked stunned as they told the star the outfit needed to be more “family friendly”.

What did Josie say on This Morning?

As Josie appeared in her bunny outfit and music played, Dermot had his head in his hands.

Josie said: “I’ve had to wear my icecream sunglasses to cool the situation down because it’s about to get hot in here.

“You wanted bunny, I’ll give you bunny. Yeah baby.”

However, Dermot said: “This is not what we said, Josie!”

Alison said: “This is not what we wanted Josie.”

Dermot added: “When I said he Cadbury’s caramel bunny, that is not what I meant.”

As the music came to a halt, Josie said: “What? Sorry?”

Alison said: “Babes, we said something family friendly, a bunny rabbit. Not like a Playboy bunny!

Covering her chest, Josie said: “Right, sorry guys. Totally got this twisted. Sorry about that.”

Alison added: “Josie, I’m not going to lie you do look hot. But babes, can you go and get dressed in a proper, more appropriate outfit?”

Josie said: “Right, you did say bunny so apologies.”

Giggling, Alison told viewers: “I’m so sorry everybody at home. She’s going to go and get dressed a little bit more appropriately.

‘When I said the Cadbury Caramel Bunny that isn’t what I meant!’@radioleary isn’t impressed with @Josiestweet bunny costume! 🐰 #ThisMorning pic.twitter.com/h31Lx3yiRe

“There will be a bunny a little bit later.”

Later in the show, Josie returned dressed as a fluffy white bunny.

Many viewers were in hysterics over Josie’s gaffe on Twitter.

Another wrote: “The snowflakes are going to have a field day over Josie dressed as a playboy bunny.”

A third tweeted: “Josie doesn’t normally make me laugh. She has today though.”

Josie doesn’t normally make me laugh. She has today though #ThisMorning

However, others weren’t impressed with Josie wearing the outfit on the daytime show.

One added: “How on earth is that appropriate for 10am on Good Friday? Kids are off school fgs!”

Another wrote: “Oh dear…poor Josie whoever advised her to do this needs a think… this was toe curling and bad taste.”