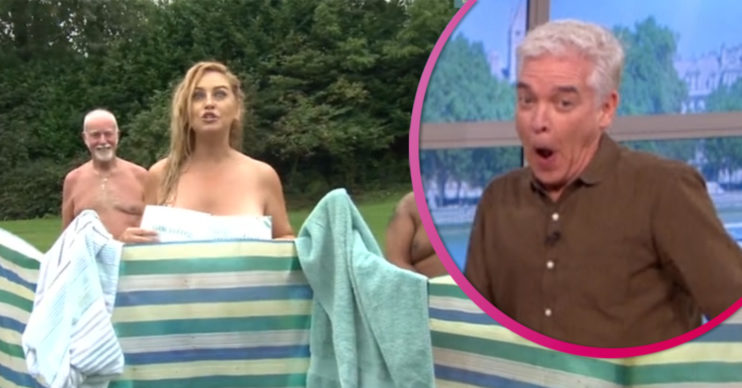 The presenter headed to a naturist camp

This Morning star Josie Gibson left Holly Willoughby and Phillip Schofield stunned as she stripped naked on the show.

The 35-year-old presenter headed to a naturist camp in Liverpool for her latest competition launch on the show and one naturist almost flashed his penis on air!

During the first segment, Josie remained professional as she interviewed naturist Alan, who was surrounded by naked men and women.

Holly and Phil couldn’t contain their shock as a pair of nude sunbathers appeared in the background of the shot.

Meanwhile, another group of naked friends were also spotted by the pool as Josie chatted away.

As the segment kicked off, Josie asked Alan about the rise in new members at the poolside facility.

He answered: “Indeed we have, we have a waiting list, a very long waiting list as soon as we were able to reopen.”

Phil said: “That completely took me by surprise!”

Holly added: “It’s a bit chilly for a bit of naturism today.”

Meanwhile, Josie joked: “I might join them later, who knows?”

Later in the programme, Josie did exactly that and stripped down.

Hiding her modesty with a screen and towel, Josie hosted the competition while surrounded by other naturists.

However, one fella almost flashed his bits as he moved from behind a car door.

Holly and Phil were shocked as the camera quickly cut back to them to try and not catch it on camera.

After the segment, Phil said: “That was close, we were right on the ragged edge there!”

Viewers of the ITV show were left in hysterics, with one saying: “Josie asking a naked representative of a nudist community if they’ve seen a ‘rise in new members’ I am HOWLING #ThisMorning.”

A second added: “@hollywills & Phillip’s reaction to that last segment with Josie at the nature reserve @thismorning #ThisMorning.”

It certainly isn’t the first time the ITV show has welcomed naked guests.

Back in March, viewers were left shocked when hosts Eamonn Holmes and Rochelle Humes interviewed President of British Naturism Mark Bass and Pam Fraser about why they decide to go naked on a daily basis.

At the time, Rochelle admitted she was struggling with where to look.

She said: “I’m not used to seeing someone walk into the studio naked.