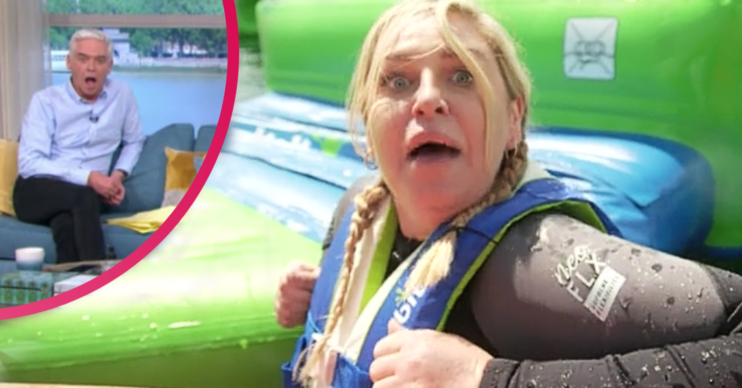 This Morning: Josie Gibson falls into a lake live on air

Thankfully Josie and her sound equipment were fine

This Morning competition host Josie Gibson made Phillip Schofield and Holly Willoughby crack up after she fell into a lake during a live link.

Reporting from a lake in Berkshire, Jodie slipped off an inflatable assault course.

Laughing herself, she had to be pulled out – but not before she apologised to the sound man for potentially ruining the equipment.

What happened with Josie on This Morning today?

Earlier in the day, Josie sipped a cocktail on Caversham Lake beach.

However, later in the programme she swapped her summer dress for a wetsuit and took to the lake itself.

Attempting to take on the aqua assault course, poor Josie didn’t last very long – she fell in even before she had started.

Her accident made Phil and Holly back in the studio crack up as she floundered in the water.

It was then a member of the crew stepped in to help her out.

As the crew member dragged her out by the life jacket – including an “undignified” bottom shot to camera – Josie still carried on with the competition link.

And she then apologised profusely to her sound editor, explaining that she was wearing some very expensive equipment strapped to her back.

“Oh my god, that was maybe my favourite moment of yours ever Josie, that was incredible,” Holly giggled.

Viewers also saw the funny side and queued up on Twitter to express their delight at the hilarious moment.

“It was bound to happen at some point, Josie is the gift that keeps on giving,” one said.

Another said: “What a professional poor old Josie Gibson is – falling into the water during a competition link on #ThisMorning but carrying on regardless.

“Made me think of Bridget Jones!! Well done Josie – what a star!”

A third said: “Ha ha ha Josie that was so graceful.

“[Cry-laugh emoji] at the guy trying to pull her out along with the cameraman!”