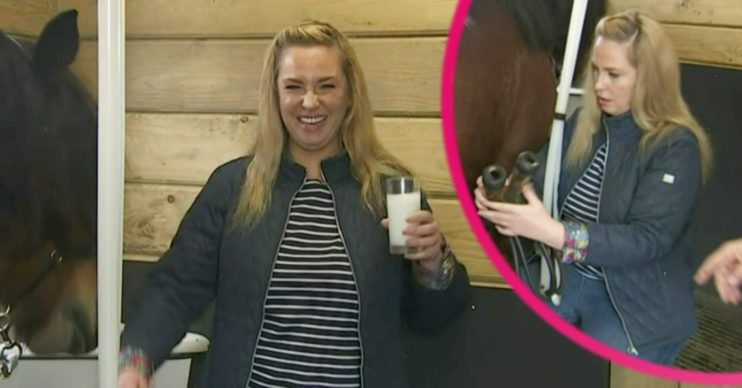 This Morning: Josie Gibson disgusts viewers as she milks a horse live on air

She then drank it and compared it to breast milk!

On Tuesday’s show, the presenter appeared in Somerset as she demonstrated the process to Holly Willoughby and Phillip Schofield.

But while Josie was happy to get stuck in, fans couldn’t believe their eyes at home.

Josie Gibson milks a horse on This Morning

Josie appeared at Cromwell Farm in Bath, where they milk and produce mare milk.

During the segment, owner Frank went on to list the benefits of drinking mare produce.

As well as being good for the skin and gut, Frank added: “It’s similar to ladies’ breast milk. When you look at the makeup of it, it’s very similar.

“I had a stroke last year and they couldn’t understand why my cholesterol went down in a matter of a day.”

Josie went on to milk the horse before trying it herself.

Giving her verdict, she said: “It’s a bit like a sweet coconut milk but it hasn’t got a smell to it.”

In the studio, Holly and Phillip appeared completely baffled.

And viewers seemed to agree!

Read more: Ferne McCann hits back at criticism over recent trip to South Africa with her new man

A second wrote: “Josie Gibson milking a horse is a sentence I never thought anyone would say on #ThisMorning.”

In addition, a third commented: “Josie milking a horse!! Well… whatever next!”

Meanwhile, a fourth compared it to a Saturday Night Takeaway prank.

The unusual segment comes weeks after Josie opened up on Entertainment Daily on her love life.

During the chat, she revealed she hasn’t felt sexy since “way before” she had son Reggie.

Read more: Ferne McCann hits back at criticism over recent trip to South Africa with her new man

“I think whenever I lose a bit of weight I feel a bit sexier, you put on those nice outfits don’t you.”

Meanwhile, back in January, Josie was forced to take a well needed break from Twitter.

She explained her decision was due to “disturbing and unhealthy” comments from trolls.