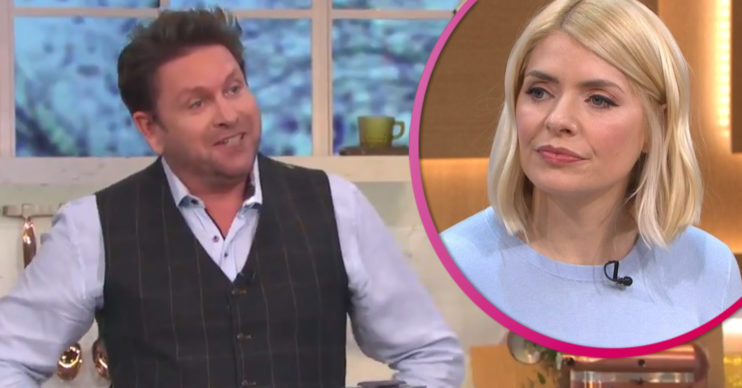 James cooked his version of the classic dish

James, 48, revealed his recipe of the classic dish during Monday’s show (March 15).

However, it didn’t win all viewers over as some declared it was NOT a fish finger sandwich.

What did ITV viewers say about This Morning?

Many claimed it wasn’t a fish finger sandwich because James used fish fillets rather than actual fish fingers.

Read more: Holly Willoughby reveals desperation to ‘be close’ to her mum again

One person said on Twitter: “Fish finger sandwich with out fish fingers??”

Another wrote: “That’s more of a fish hand than a finger!”

That’s more of a fish hand than a finger 🤣 #Thismorning

#ThisMorning That is not a fish finger, it’s a slice of fish in breadcrumbs!

A third tweeted: “That is not a fish finger, it’s a slice of fish in breadcrumbs!”

Meanwhile, others questioned why James was “faffing” about with the recipe.

That is not a fish finger, it’s a slice of fish in breadcrumbs!

One added: “Sod this faffing about. Birds Eye fish fingers, Hovis bread, Hellmann’s mayo. Job done. No prep, no effort, all the flavour.”

Another said: “I like James, but if you’re having a fish finger sandwich, it’s because you want something simple. [Expletive] all this faffing about.”

“You pick up a loaf of bread, some butter and a box of Birds Eye fish fingers. Pop the fish fingers in the oven, toast the bread and you’re done.”

There is absolutely no need for rabbit food in your fish finger sandwich; diabolical behavior #thismorning

Another said: “There is absolutely no need for rabbit food in your fish finger sandwich; diabolical behaviour.”

Another commented: “Fish fingers look yummy and waiting for the chocolate fondants.”

She said, “Are you making the fish fingers?” to which James replied: “Yes… it would be a lot easier if I just defrosted them.

“My life would be a lot easier if I just went to the freezer and just defrosted everything!”

Holly burst into giggles as Phillip Schofield joked: “I don’t know how you’d fill eight minutes with take them out the freezer.”

Our @Hollywills had a fishy fail this morning when she asked @Jamesmartinchef if he was using frozen fish fingers! 🐟 #ThisMorning pic.twitter.com/XJK9VJqZMu

Birds Eye even tweeted This Morning, admitting it made them “giggle”.

The tweet read: “This made us giggle too, @hollywills! That looks very tasty @jamesmartinchef but we’re definitely here for anyone who wants a quick and easy fish finger sandwich!”