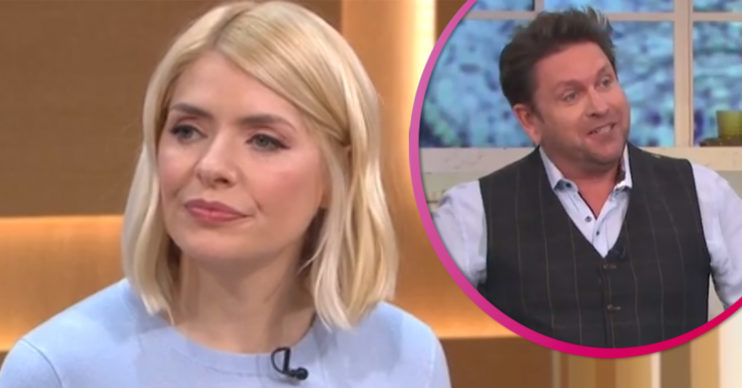 Some people weren't happy with the segment it seems

Holly Willoughby and Phillip Schofield teased James as he made a fish finger sandwich on the programme.

Holly even asked the chef if he was using frozen fish fingers in the dish – leaving James stunned.

What happened on ITV show This Morning?

Before his segment, James told viewers: “We’re going to do some fish finger sandwiches, we’ve got some beautiful fresh fish that’s just come in.”

However, Holly asked: “Are you making the fish fingers?”

James replied: “Yes… it would be a lot easier if I just defrosted them.

“My life would be a lot easier if I just went to the freezer and just defrosted everything!”

Holly burst into giggles as Phil joked: “I don’t know how you’d fill eight minutes with take them out the freezer.”

Meanwhile, later in the show, James created the meal and poked fun at Holly.

He said he could do it “her way”, adding: “I’ve just wasted eight minutes of my life!”

According to The Sun, Ofcom received 67 complaints over Holly’s comments to James.

Meanwhile, the sandwich itself left many viewers divided as James cooked it in the kitchen.

Some declared it was NOT a fish finger sandwich since James used fillets rather than actual fish fingers.

One said on Twitter: “Fish finger sandwich with out fish fingers??”

In addition, another wrote: “That’s more of a fish hand than a finger!”

One tweeted: “Sod this faffing about. Birds Eye fish fingers, Hovis bread, Hellmann’s mayo. Job done. No prep, no effort, all the flavour.”

However, another gushed: “Fish looked gorgeous!”

In addition, one added: “Fish fingers look yummy and waiting for the chocolate fondants.”

What did you think of James’ fish finger sandwich recipe? Leave us a comment on our Facebook page @EntertainmentDailyFix.