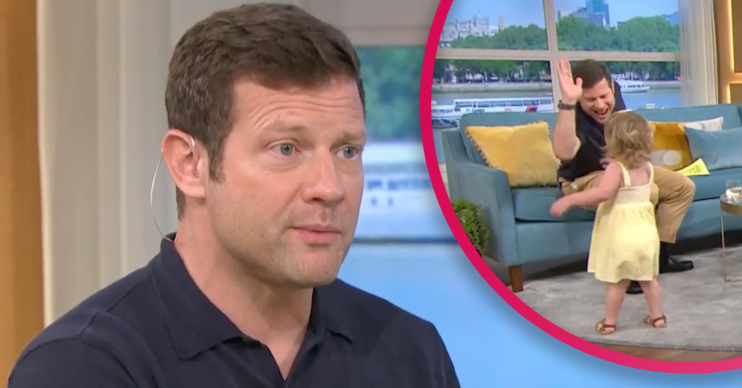 This Morning: ITV should brace itself for wave of Ofcom complaints over Dermot’s high five, viewers predict

ITV should brace itself for a wave of Ofcom complaints, This Morning viewers have predicted.

On today’s show (June 25), viewers watched as hosts Alison Hammond and Dermot O’Leary welcomed a young family onto the show.

Chloe, husband James and two-year-old daughter Olivia appeared on This Morning to talk about their Guinness World Record.

Chloe and James hold the record for the couple with the greatest height difference as he suffers from a rare form of dwarfism.

So what happened on This Morning on ITV today?

As Alison and Dermot conducted the interview, little Olivia appeared to take a shine to father-of-one Dermot.

He was seen waving at the tot and giving her a thumbs up, before she climbed down from her mum’s lap.

Little Olivia ventured over to Dermot and the host asked for a high five.

And it’s this which could see the complaints flood in, viewers predict.

“Stop high-fiving the child, Dermot! Now they have to sanitise her!” said another.

“People will be complaining to Ofcom after Dermot touched Olivia,” said another.

“Ofcom’s gonna be busy after that high five,” said another viewer.

“Dermot not keeping his social distance from Olivia by high fiveing her. If she gets COVID tomorrow you’ll be sorry,” another warned.

‘Fair play to Dermot for keeping her entertained’

However, not everyone was up in arms about the high five.

Others thought Dermot was adorable with the little girl.

“All the people moaning about the high five… there would have been more if Dermot had said no I can’t do that to a 2 year old!” said one.

“Like Dermot is going to be like ‘sorry not allowed to high five you, social distancing & all’ to a 2 year old. It’s an ‘oh yeah’ after thought to a child,” said another.

“Fair play to Dermot for keeping a two year old entertained,” said another.

“Children are in schools and nurseries and have been since July last year,” said another.

“The staff have to have physical contact with the kids when they need nappies changing or hurt themselves. It was just a high five,” they added.