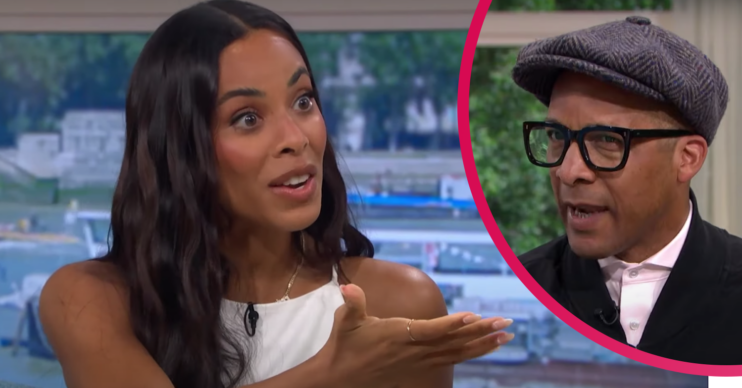 She knows how Jay Blades feels

This Morning star Rochelle Humes opened up about how she regards her dad earlier today (Thursday May 12) on the ITV daytime show.

Presenter Rochelle told guest Jay Blades she identified with how he has previously described the relationship with his own father.

The moment arose as This Morning co-host Phillip Schofield brought up an acronym Jay uses in his book to explain his family links.

During the chat with The Repair Shop star, Phil mentioned ‘TMWCTMB’.

Jay clarified the letters, used in his book Making It, refer to ‘The Man Who Contributed Towards My Birth’.

Rochelle immediately pushed her hand into the air and said: “I’ve got one of those!”

She continued by emphasising just how much she can relate to what Jay means with the acronym.

Rochelle admits: ‘A lightbulb went off’

Rochelle spoke passionately, making it clear Jay’s words had really resonated with her.

The 33-year-old said: “When I read this… I’ve always had this odd relationship where I’m aware that I’ve never had a relationship with him.

“So as you said that, a lightbulb went off. Honestly, it’s so nice to read that.”

Jay was happy but surprised as he explained further why how strained relationships may required alternative titles.

He replied: “I’ve never met anybody who agrees with that.

“The way I see it is – if you’ve got a mechanic who never fixes a car, you can’t call him a mechanic.

“So to have the title as a ‘father’ or a ‘dad’, you have to have some of those responsibilities along with it.”

Jay continued: “So that’s why I call him ‘The Man Who Contributed Towards My Birth’.

“Because that’s what he did. Nothing else apart from that.”

Read more: Who’s who in the cast of Emmerdale 2022

Asked by Phillip whether he stays in touch with his father, Jay indicated their relationship was not close.

“He has contact with me but I tend to brush him off,” Jay added firmly.