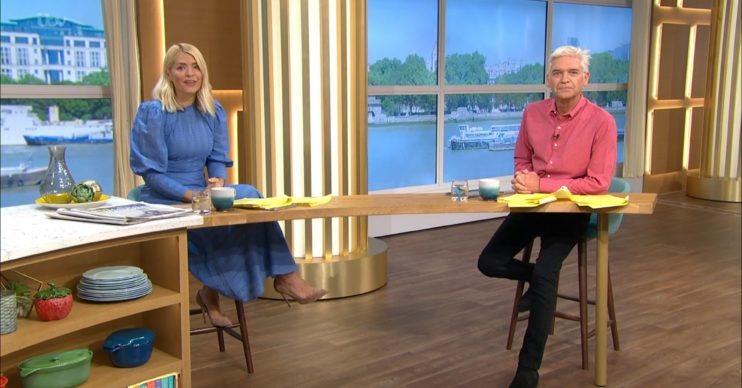 But viewers worry they spread coronavirus…

TV’s Holly Willoughby and Phillip Schofield couldn’t contain their giggles as they presented a slot about hot tubs on today’s This Morning (June 3).

Holly revealed sales of hot tubs have soared by 490% during lockdown.

And the pair spoke to etiquette expert William Hanson and hot tub lover Lizzie Cundy to debate whether they’re tacky or the ultimate lockdown luxury.

“They’re a Petri dish of filth,” Will began.

“I think they’re vile and I can’t think of anything worse than sitting in my own grime,” he said.

“So Lizzie,” said Phil, “you are currently sitting in your own grime.”

“I am sitting in a glorious hut tub and you need to get your facts right,” she countered. “This is so clean, it’s the same as a swimming pool, it has all the chemicals and cleaning facilities and it’s absolutely beautiful.”

So with five people soaking in a hot tub at one time you have a tablespoon of poop in your hot tub.

However, Holly appeared to back up Will’s claims after doing a little research in the ad break.

“I found this from a professor of microbiology,” she revealed. “He said the average bather has about a 10th of a gram of faeces in his gluteal fold, which is a nice way of saying butt crack.”

Holly continued: “So with five people soaking in a hot tub at one time you have a tablespoon of poop in your hot tub.”

“There’s none in my hot tub”

With Holly and Phil in in fits of laughter, Lizzie quipped: “I can safely say there is none of that in my hot tub, Holly.”

“But you can’t guarantee it’s not in your butt crack though, can you,” laughed Phil.

“Hearing the words ‘butt crack’ from the kitchen and finding out it was Holly talking about hot tubs is perhaps the funniest thing I’ll hear today,” said one viewer.

“Every other facility is shut – leisures centres, pools, pubs, you have have to stay at home to save lives, we have really no fun at the minute,” said Lizzie.

However, William had other ideas, explaining that hot tubs are 10˚C warmer than pools and usually at a temperature where bacteria readily grows.

He added: “Plus, the last time we appeared together in This Morning you admitted you weed in the shower, so I’m sure people will be queueing round the block to jump into your hot tub.”

Before you jump into that hot tub, you might want to consider what else is in there… Thanks for that @hollywills! 😂💩

So do you agree with @williamhanson or @lizziecundy? Watch the debate in full and have your say!

“There’s nothing wrong with that, I know everyone has once weed in the shower,” she said.

“It was Anthea Turner’s shower, I’ve admitted that,” she said. “I was in a hurry to get to the show.”

“So you don’t wee in the hot tub?” Phil asked with a smile.

“I don’t wee in the hot tub Phil because I’ve just got the loo next door. There’s plenty of bubbles, we’ve got champagne, it’s fun, it’s perfect,” she said.

Holly added that some hot tubs are self-cleaning and Lizzie extolled the health benefits of having a hot tub.

She even claimed that Prince Harry ordered two when he was at school and “loved a hot tub”.

Lizzie ended the segment with an invite for the This Morning hosts, explaining one of them could dip their toes into the hot tub while still maintaining social distancing.

Deadpan, he said: “I’d rather just go and roll around in the mud, I’d probably be cleaner.”

Some agreed on Twitter and said they worried about the spread of COVID-19.

“Odd segment on @thismorning surely coronavirus will spread from one person to another in a hot tub @lizziecundy! Doesn’t matter how far apart you are to each other,” said one.

What do you think of hot tubs? Do you have one? Tell us on our Facebook page @EntertainmentDailyFix.