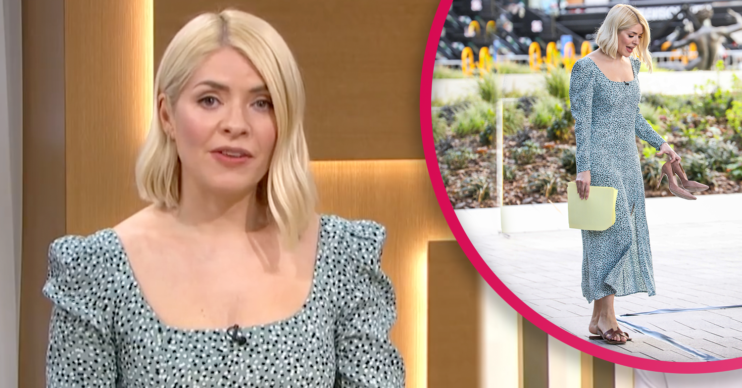 She had to switch to flat shoes as a result

This Morning host Holly Willoughby blamed her age for an injury she suffered on the daytime show today (March 30).

Holly turned 40 in February and, although she certainly doesn’t look it, it appears as if the host is starting to feel her age.

Earlier today, Holly had to change from her trademark heels into flats, and she addressed the change – and the injury – during the Spin to Win segment.

What happened on today’s This Morning?

Hosts Holly and Phillip Schofield headed outside for some of the segments on today’s This Morning.

And it’s there that the mishap seems to have happened.

Read more: This Morning viewers know why Clodagh McKenna’s always smiling after finding out who her fiancé is

Holly headed outside in her heels and her gorgeous floral & Other Stories dress, and was seen heading back in wearing flats while holding her heels.

When they came back to front Spin to Win, she had switched sides with Phil, and he was in charge of wheeling in the tombola.

And it turns out that the change was down to Holly’s injury.

This Morning: How did Holly Willoughby hurt herself?

Holly explained that she pulled her back when she uncrossed her legs.

She said: “You might have noticed I’m on this side today, that’s because during the show I uncrossed my legs and pulled my back.

“Because now I’m over 40 that’s the stuff that happens. Got my flip flops on because I can’t wear my heels,” she added.

Phil then explained why he was in charge of the balls on today’s Spin to Win.

If it hadn’t been for social distancing I would have been on your back.

“You can’t actually walk out to get the tombola,” he said to Holly.

Phil then joked that Holly took so long getting back inside the studio that she almost had to be “wheeled” back in.

“If it hadn’t been for social distancing I would have been on your back,” she joked to her co-host.

What did viewers say about Holly’s style switch up?

Nonetheless, viewers thought she looked gorgeous – whether in heels or flats.

“Saw you in flats for a minute,” said one viewer with the love heart eyes emoji.

“I love the shoes,” another cooed.