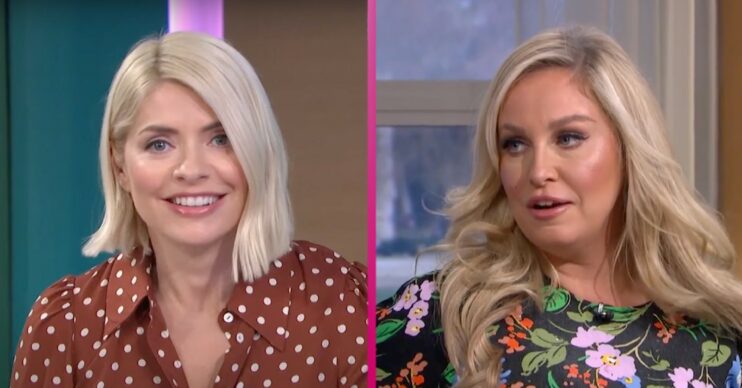 This Morning: Holly Willoughby to host with Josie Gibson

Fans are over the moon!

Holly Willoughby is set to make her long-awaited return to This Morning tomorrow (Thursday, February 3) after two-and-a-half weeks away.

However, with Phillip Schofield in isolation with Covid-19, Holly will be hosting the show with someone else by her side – Josie Gibson!

Where has Holly Willoughby been recently?

Regular This Morning viewers will have noticed that Holly has been absent from the show for the last couple of weeks.

The 40-year-old star has taken some time off from the ITV show to film a new BBC show with Lee Mack.

The show, Wim Hof’s Superstar Survival, will see celebrities compete in challenging tasks in some of Europe’s “harshest conditions”.

In Holly’s absence, Rochelle Humes has been co-hosting This Morning alongside Phillip – until disaster struck on Monday night (31 January), that is.

Phillip tested positive for Covid-19 on Monday, leaving ITV scrambling for hosts to fill the breach left by the 59-year-old.

Viewer reaction has been mixed to the recent changes that have been forced on ITV. However, plenty will be overjoyed to hear the latest news!

Holly Willoughby returns to This Morning

Rochelle broke some exciting news at the end of today’s show which will have undoubtedly thrilled many.

The 32-year-old revealed that Holly and Josie would be hosting the show tomorrow!

“Holly and Josie will be here tomorrow when they’ll be chatting to Spider-Man star Tom Holland about his new movie,” she revealed as the show came to an end.

Though Rochelle does have her fans, many have been calling for Josie to replace her for weeks now.

Fans have also been frustrated with Holly’s absence too. Many believed the star was going to be back on Monday (January 31) just gone.

They were therefore baffled to see Rochelle still hosting the show, with Holly nowhere to be seen.

News of a presenting partnership of Holly AND Josie went down a treat on social media after it broke!

Viewer reaction to the news about Holly Willoughby and Josie Gibson

Viewers took to Twitter to celebrate the news that Holly and Josie would be entertaining them tomorrow.

“Josie and Holly! What a surprise,” one fan tweeted.

“Yay Holly is back tomorrow,” another said.

Read more: When did Holly Willoughby join This Morning and what is her net worth?

One viewer wasn’t as excited by Holly’s return though.

“Oh well, won’t be watching any longer. That unbearable Willoughby back,” they tweeted.

Holly and Josie have never presented the show together before, so tomorrow will be a big shake-up.

Josie stepped up to take Holly’s place back in November when the 40-year-old was ill with a stomach bug.

You can catch Holly Willoughby and Josie Gibson hosting This Morning tomorrow (Thursday, February 3) at 10am on ITV and ITV Hub.