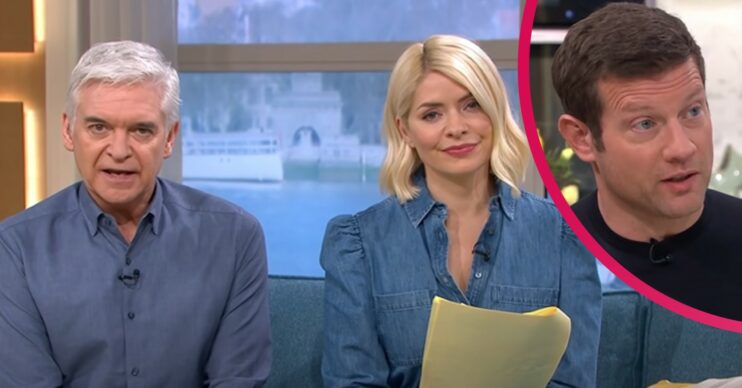 Holly and Phil's Easter break has come to an end

This Morning hosts Holly Willoughby and Phillip Schofield will be back on the show tomorrow after their Easter break.

On today’s Bank Holiday programme, Alison Hammond and Dermot O’Leary confirmed Holly and Phil would be returning on Tuesday.

At the end of the show, Alison told viewers: “Holly and Phil are back tomorrow. Donal [Skehan] joins us in the kitchen with his garlic and rosemary chicken.”

Alison also revealed that Holly will be reuniting with her Freeze the Fear co-host Lee Mack on Tuesday from 10am.

Viewers were divided over the news, with many left unimpressed.

Over the Easter break, viewers have had Alison and Dermot hosting as well as Vernon Kay and Josie Gibson.

One person said on Twitter: “This Morning is SOOOOOO MUCH BETTER WITHOUT HOLLY AND PHIL!!!  Stick with Vernon, Josie, Dermot and Alison.  They are all so much more fun.”

Another joked: “Basil [Brush] should be on tomorrow instead of Phil & Holly,” after he featured on today’s show.

A third added: “Holly and Phil are back tomorrow?” alongside a GIF saying ‘No! No!’.

However, one tweeted: “Not watching today’s #ThisMorning as can’t stand Alison and Dermot hosting it. Thank god Phillip and Holly are back tomorrow.”

Viewers have been loving the Easter hosting line-up for the past couple of weeks.

So much so, many were begging Vernon and Josie to become permanent presenters!

After their hosting stint last week, one viewer said on Twitter: “Vernon & Josie need to be permanent presenters.”

Another explained why they think Josie and Vernon should be main presenters.

They said: “The people have spoken (well the This Morning Twitter crowd – it’s the same) Josie and Vernon should be the main presenters of #ThisMorning.

“They are funny, natural and also empathetic – job done.”

One tweeted: “No we don’t want Phil & Holly back we want Vernon & Josie.”

Are you glad Holly and Phil are back tomorrow? Tell us on our Facebook page @EntertainmentDailyFix.