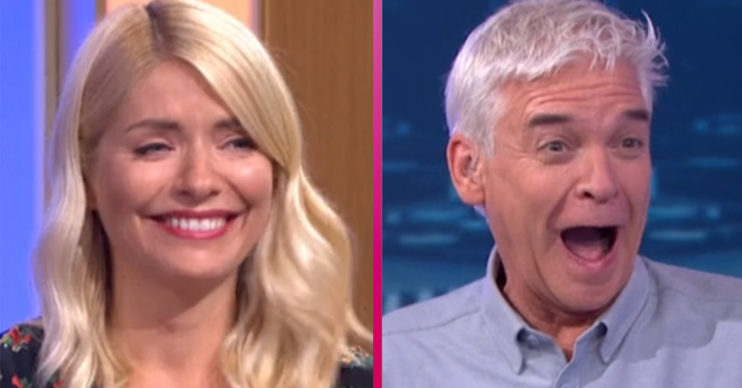 Holly found the quip amusing too

The duo were going against each other in a game of ‘Guess the Gadget’ with Steve Wilson on Thursday’s show.

Steve asked Holly and Phil to guess one object, which was a long bag with strings attached.

Read more: Holly Willoughby criticised for ‘expensive’ This Morning outfit as fans beg her to cut her hair

As the buzzer went off, Holly exclaimed: “Hold on, hold on! What is it?!”

Phil said: “I literally have no idea, I don’t know how it works or how you unravel it.

Phil guessed it was for “carrying a bottle”.

However, Holly said: “I’ve put an umbrella cover dryer. If you have a wet brolly, you put it in there and you squeeze it and it squeezes out all the moisture.”

I literally have no idea, I don’t know how it works or how you unravel it.

Phil joked: “Something we’ve always needed on the planet!”

Of all the answers @hollywills could have given for Guess the Gadget, we didn't expect this! 😱

Steve told them: “You’re not close enough either of you.

Holly then joked: “It’s a ball bag!” as Phil, Steve and the studio burst into hysterics.

Steve laughed: “That’s exactly what it is yeah.”

He added: “Right, swiftly moving on…”

Another wrote: “@hollywill It’s a ball bag?? I literally spilled my tea laughing! @Schofe your face was priceless.”

@hollywill It's a ball bag?? I literally spilled my tea laughing! @Schofe your face was priceless #thismorning