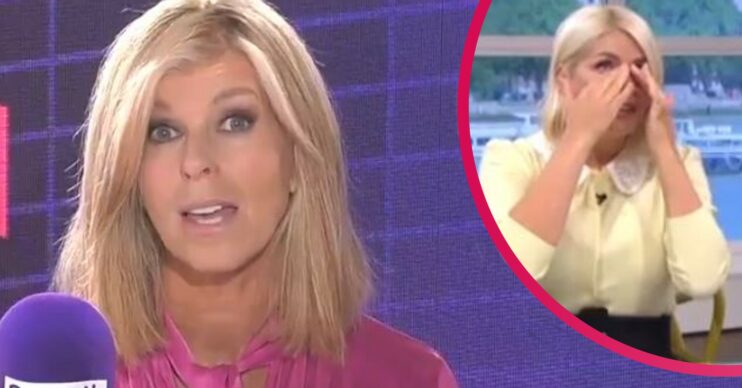 This Morning host Holly Willoughby became tearful as she spoke to Kate Garraway about her husband Derek Draper’s health battle.

Derek has been receiving round-the-clock care as he battles the after-effects of COVID-19 after spending over a year in hospital fighting the disease.

Kate appeared on Thursday’s This Morning to speak about receiving a nomination at the NTAs for her ITV documentary, Finding Derek.

The show followed Kate and Derek’s lives during his battle in hospital.

Holly Willoughby tears on This Morning

Holly asked Kate: “Obviously Derek’s getting care and I know how hard that’s been to put in place. But what about you?

“Who’s looking after you because you’re still having to go to work like life is still going on, you’re still a mum to the kids.

Kate replied: “Well that’s a very good question. I don’t know. I’m not even one hundred per cent sure I am on track.

“I feel like I drop balls all the time. I’m not doing enough for Derek really. I am absolutely shattered all the time.

“But this is the same story for everybody who’s involved in care of others. I am very lucky that I have a job, which allows me to keep things going.

“I haven’t had to move yet so the kids can still go to the same school, keep their friends.

“But I think it’s friends and people like you guys and everybody at ITV that keep giving me support.”

Kate continued: “But I’m not sure I am on track really. I think I’m probably doing a lot of paddling under the surface.

“Not to sound ungrateful, because he’s here when many people aren’t, but you just want to share with him the problems and you just want those little looks he’d give you when the kids were doing something.

“And because he can’t and you have to keep hoping he can, and you’re in a strange vortex of almost bereavement but grateful that he’s alive.

“It’s just a very strange feeling. It’s a day at a time and trying to keep going.”

“His progress is tough if I’m honest, it feels like there is no change, it feels painfully slow”@KateGarraway provides an update on Derek ahead of tonight’s NTAs where ‘Finding Derek’ which highlights the devastating effects of Covid, is nominated for best Authored Documentary. pic.twitter.com/uKCRmrGnWS

What did Kate say on This Morning?

When asked about people who say the coronavirus “doesn’t exist”, Kate said: “If you don’t think it exists, come and spend an hour in my home.

“You don’t want that in your life.”

Holly then became tearful as she said, “Sorry Kate,” as she wiped away tears.

Kate said: “Aw Holly, are you crying? I can’t see you, please don’t cry! I don’t want to make everybody miserable.”