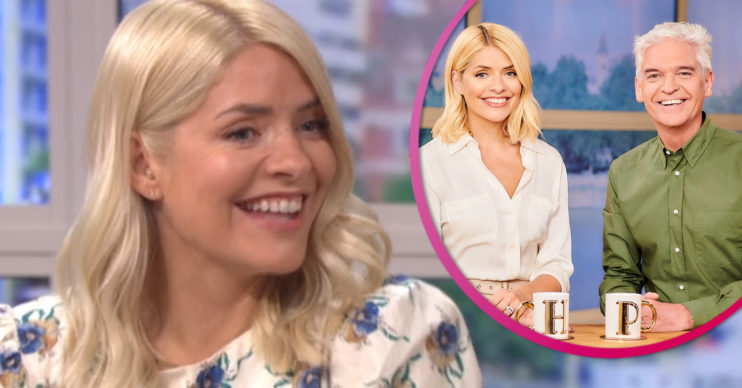 This Morning: Holly Willoughby fans congratulate star as she marks 11 years on show

The presenter first joined the ITV show back in 2009

This Morning host Holly Willoughby has been showered with messages of support from fans as she marks 11 years on the show.

The 39-year-old presenter was congratulated by viewers as she marked the special occasion with an outfit shot on Instagram.

The ITV star first appeared alongside co-host Phillip Schofield in 2009, following the departure of Fern Britton.

Taking to Instagram, Holly celebrated the occasion with one of her regular fashions posts.

The mum-of-three looked incredible as she posed in a cream midi dress and matching heels.

Alongside the photo, she shared: “Morning Monday… how are you? Is shining today.

“See you at 10am on @thismorning @itv. Dress by @anthropologieeu.”

Fans rushed to comment on the snap, with many quick to remind Holly of the special day.

One wrote: “It’s been 11 years today since you started This Morning!! You look incredible.”

Another said: “You look gorgeous!! And happy 11 years on This Morning!!!”

When did Holly Willoughby join This Morning?

Holly and Phil first worked together on Dancing on Ice in 2006, and joined forces on This Morning three years later.

Reminiscing on their first day together, Phil said: “I was nervous for her because I wanted her to have a good time and enjoy the experience.

“I wanted to make sure she was okay and felt comfortable and happy but the minute she started it was quite obvious that we were going to have a ball.”

“I had worked with Phil for a few years on Dancing On Ice, so we already had a fantastic friendship and a great working relationship.

“There is no other job in telly like it, there are so many reasons why it’s such a brilliant show. It’s the perfect show!”

It certainly isn’t all fun and games for the presenter.

Following recent reports, it’s believed Holly is “gearing up” for a legal battle with her former talent agency – and she isn’t prepared to “roll over” in the dispute.

The Sun reports that Holly isn’t happy with her former talent agency YMU, who allegedly tried to claim 15 per cent of her future earnings.

The accusation comes after Holly left the agency and started her own, called Roxy.

A source told the newspaper: “Holly set Roxy up with an all-female team. She is all about empowerment, and even if this goes legal she will not roll over on the matter.

“Holly is a strong, savvy, very successful woman working in a tough industry — she won’t be taken for a fool.”