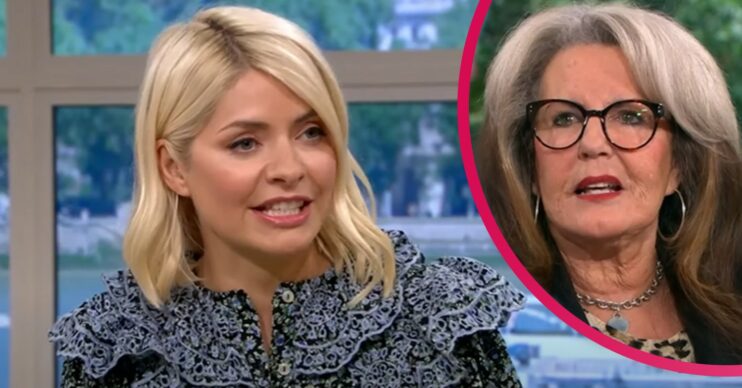 Holly Willoughby was less than impressed with one of her guests on This Morning today.

The 70-year-old defended her job, but Holly struggled with the ethics of the profession.

Sherry explained that her clients were “slaves” and once took a man out for a walk as a dog.

She later tied him to a tree.

While classed as a sex worker, Mistress Sofia insisted her job is “about domination but sex”.

But Holly questioned the morality of what was happening.

She said: “Some of these people who come and see you are in relationships, some of them are married.

“There will be people watching this saying ‘well, aren’t you just involved in helping them to cheat’.”

Sherry replied: “Not every partner would be happy for their husband to come and see me, but isn’t it preferable that they come to see me because they’ve got a kink, rather than go to an escort?”

Holly said she couldn’t see the difference but the grandmother pointed out that in her line of work there is no sex.

But the Freeze the Fear star wasn’t having any of it and accused Sherry of aiding “emotional betrayal”.

She asked: “Isn’t it emotional betrayal?” to which Sherry said: “It possibly is, but people who come to me don’t want that kink with their partner, they want to keep the two seperate.”

Apparently she has been swamped by women wanting to “learn the ropes”.

One fan tweeted: “Great guest, loved her interview. She’s probably saved a lot of marriages out there by satisfying their urges.”

Meanwhile, another said: “It seems bizarre to me, but if it’s what you enjoy, you go for it!”

However one fan didn’t seem impressed by the grandmother’s antics.