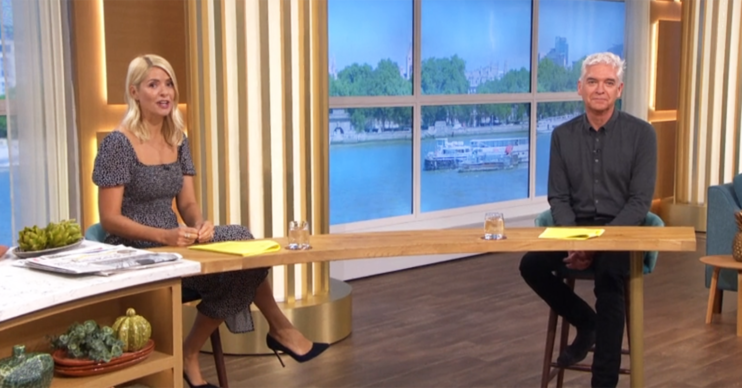 This Morning stars Holly Willoughby and Phillip Schofield revealed the studio has had a makeover.

Part of the studio had a revamp after interior designer Kelly Hoppen suggested a new design.

While Holly and Phil were on holiday, Kelly came in to help crew members redesign the area.

Phil said: “Each year, at the start of the new series, we like to make one or two little changes on the set.

“Maybe cushions or ornaments. This year, we took some advice from Kelly herself.

We like to make one or two little changes on the set.

“Here’s what she told Chris, our art director live on the show with Alison [Hammond] and Dermot [O’Leary] about our green room.”

What did Kelly Hoppen say on This Morning?

Kelly told the director: “That sofa is the wrong shape so what we need is a semi-circular sofa that sits into the corner.

“Then a round rug and a big round coffee table.”

Holly and Phil then showed what the room looked like last series before revealing its makeover.

The after shot shows a brand new light grey round sofa accompanied by a yellow swivel chair.

There’s also a new coffee table and a black and white patterned rug.

Surrounding the sofa and other pieces of furniture are several plants in different sizes.

Holly and Phil walked onto the set as she said: “I mean look at that!”

Phil admitted he loved the new swivel chair and pretended to be a 007 villain.

He said in a different voice: “Mr Bond, I expect you to die.”

Holly asked: “It’s quite nice actually, do you like it?”

Phil replied: “Yeah I do, very much!”

Kelly then joined them via video call and said: “I think it looks really good.

Read more: Holly Willoughby and Phillip Schofield gutted as This Morning guest warns hugs could be ‘banned’ until 2021

“The swivel chair helps because if people are waiting they can talk to each other and then they can swivel round and look at you.”

What do you think of the makeover? Leave us a comment on our Facebook page @EntertainmentDailyFix and let us know.