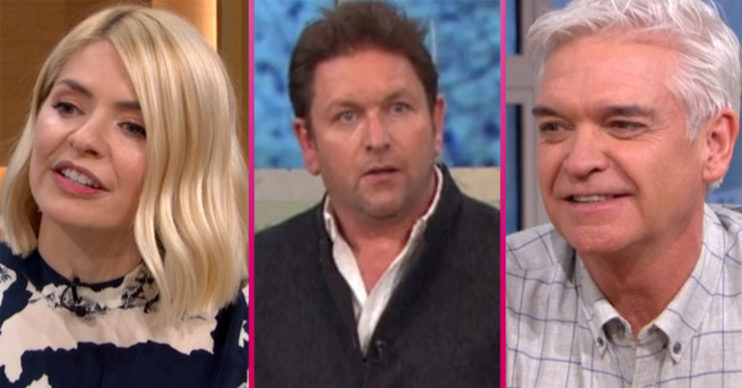 This Morning viewers were left baffled by Holly Willoughby and Phil Schofield today.

However, viewers criticised Holly and Phil’s “rude” behaviour during the segment while some predicted TV duo Ant and Dec were behind their antics.

Some thought Ant and Dec were telling the pair what to say for a Saturday Night Takeaway segment.

What happened to James Martin on This Morning today?

During the segment, Phil said he got a cramp in his arm and Holly tried to fetch him some salt.

At one point, she even started beatboxing in time with the electric whisker!

She exclaimed: “Beat the eggs with a beat!”

As James added nibbed almonds to his dessert, Holly said: “Can you choose any other sort of nut? Don’t tell me what to do, if I want to put something else on top of it I think I should be allowed.”

Looking baffled, James said: “Hazelnuts, you can put chocolate bits if you want.”

As they tucked into their desserts, Phil said: “It tastes better than it looks actually!”

Holly added: “I’m not being rude but it does taste better than it looks.”

Phil burst into giggles as James carried on cooking.

Holly and Phil then claimed they could hear a noise in the studio, leaving a confused James looking around.

Viewers were confused by the duo’s behaviour, with some people branding them “rude” to James.

Hope @jamesmartinchef has a word or three with @hollywills & @Schofe for their rude behaviour! #ThisMorning

One person said on Twitter: “Poor James Martin thought Holly and Phil were so rude throughout that last segment.”

Another wrote: “Hope @jamesmartinchef has a word or three with @hollywills & @Schofe for their rude behaviour!”

One added: “Phil and Holly are being incredibly rude to James Martin.”

However, others were convinced Ant and Dec were telling Holly and Phil what to say for their Saturday Night Takeaway segment Get Out Of Me Ear!.

One tweeted: “Ant & Dec were definitely in their ears.”

Ant & Dec were definitely in their ears 🙈 #thismorning

@jamesmartinchef if that wasn’t Ant & Dec’s ‘Get Out Of My Ear’ in Holly & Phils ear pieces during your cooking segment on This Morning, I’ll eat my hat. I think you’ve been pranked James 🤔🤪@hollywills @Schofe #ThisMorning #Getoutofmyear #jamesmartin #antanddec

Another wrote: “@jamesmartinchef if that wasn’t Ant & Dec’s ‘Get Out Of My Ear’ in Holly & Phil’s ear pieces during your cooking segment on This Morning, I’ll eat my hat.”