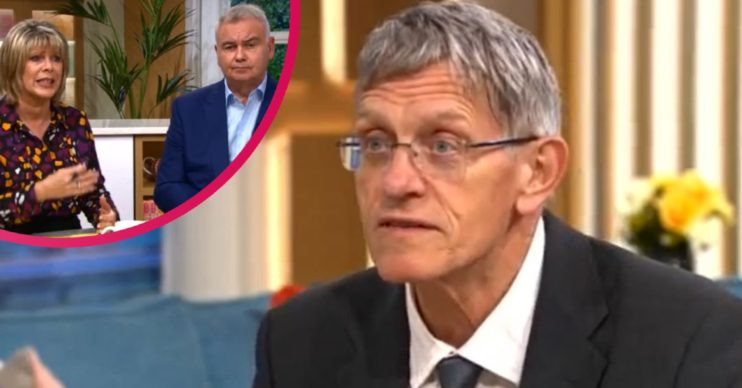 This Morning: Viewers complain to Ofcom over lockdown travel segment

Simon Calder was on the show earlier this week

Dozens of This Morning viewers have reportedly complained to Ofcom over a travel segment on the programme.

As a result of a surge in coronavirus cases in Spain, the government has updated the lockdown rules so that anyone returning from the country has to self-isolate for 14 days.

Why were there complaints to Ofcom about This Morning?

On This Morning earlier this week, travel expert Simon Calder featured among the guests to chat to hosts Eamonn Holmes and Ruth Langsford about the changes.

And he seemingly advised Brits holidaying in Spain to ‘cheat’ the new rules.

Now, viewers have complained to Ofcom about it.

According to the Metro, 46 people have filed complaints over the This Morning chat. It’s not yet known whether or not the body will investigate.

On Monday’s episode, Eamonn and Ruth spoke with Simon and Emily Woods, who runs a PPE charity and spoke via video link from Spain.

She explained that having to self-isolate for two weeks will have a “huge impact” on her and the work she is doing.

Go to France or Italy.

Simon told her: “I’m really, really sorry for the situation you and your family and many other people are finding themselves in on this sunny morning in Spain.”

He then continued to offer her some advice on getting around the quarantine rules.

Simon explained: “The only way to reduce the two weeks of quarantine is to leave the country again. To go to France or Italy or anywhere else you like and that way you can reduce the quarantine time.”

‘I don’t make the rules’

He said you could catch another flight to France, or even travel back home through the country to avoid the rules.

Ruth seemed confused and said: “So you’re saying you come home, start quarantine, then pack your bags and leave again. You’re not allowed to do that?”

Emily seemed unhappy with that suggestion, questioning the morals and the logistics of it. She pointed out she would be “potentially infecting others” if she did it.

Ruth went on to say: “The rules are we quarantine, that’s the government advice at the moment, so we have to stick with that.”

What did you think of the This Morning segment? Leave us a comment on our Facebook page @EntertainmentDailyFix and let us know.