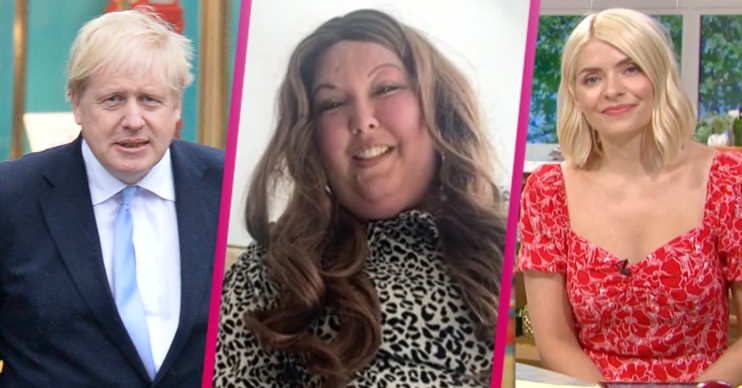 'Stuff the rules – have the party!'

Heather Bone appeared on This Morning again today (June 23) and told hosts Phillip Schofield and Holly Willoughby she fears Boris Johnson may force her to cancel her planned farewell party.

Heather, who has terminal cancer and three months to live, appeared on the show yesterday.

She won £2k on Dosh on Your Doorstep and said she was planning to spend it on a party to say goodbye to all her family and friends.

So what happened with Heather Bone on This Morning today?

Heather said she’d been up most of the night reading messages from well-wishers.

She then told Holly and Phil how the party planning was going, sharing her fears over the current COVID-19 restrictions.

Read more: What did Holly Willoughby wear on This Morning today?

Heather said: “It’s going really well. I’ve just got to wait and hope Boris does not change it .

“All my family booked up for the 3rd, but because Boris then moved it, they can’t move it to another date.”

How did This Morning viewers react to Heather’s appearance?

This Morning viewers once again reached for the Kleenex, taking to social media to pay tribute to courageous Heather.

Some also offered advice when it comes to party planning in the middle of the pandemic.

Read more: Phillip Schofield hugs his mum for the first time in months

“Heather, my advice to you. Sod what Boris says and have that party! You truly deserve it,” said one.

“Heather, have as many as you want at your party!” declared another.

Another added: “Have your party Heather. Dominic Cummings will probably be having or had a big barbecue in his garden!”

So how can you donate to Heather’s party fund?

A GoFundMe page has now been set up for Heather and her family.

It’ll help pay for the party and give Heather some peace of mind that her boys will be looked after in the future.

You can donate here.