This Morning fans were left fuming when a guest admitted she refuses to tell her seven-year-old daughter she’s pretty.

Clare O’Reilly believes it would send the wrong message to the girl because looks are merely a “genetic lottery” and have “nothing to do with her”.

And the mum-of-three had viewers in a lather when she accepted that her stance could leave young Annie emotionally scarred in later life, and that Clare might have to “fork out for a lot of therapy”. 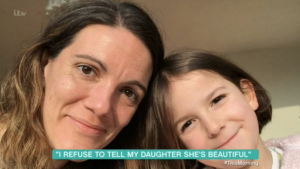 The mother, who also has two older sons, aged 14 and nine, told hosts Eamonn Holmes and Ruth Langsford: “When I had Annie, from the second she was born, the first thing the midwife said was that she was beautiful.

“Everybody knows no newborn baby is beautiful but she was praised for being being beautiful from the very beginning.

“It just jarred with me slightly because the boys had never been called that when they were so tiny.

“Then, as she grew, it just seemed to be that her appearance seemed to merit comment a lot more than the boys’.

“Her looks are nothing to do with her, they’re just a genetic lottery.

“So why should I praise her for something that has nothing to do with her when actually there are myriad things she’s wonderful at?”

Clare said she did praise Annie for her other attributes.

“She’s the kindest friend, she’s got masses of empathy, she loves animals, she’s fantastic at art, she works really hard to learn to play the piano,” the mum said.

“I do think she’s gorgeous but it’s not the sum of her parts or the fabric of who she is.”

Clare insisted Annie had never asked her if she was pretty and that her daughter found “sunsets and dogs” beautiful, rather than people.

She said a recent survey revealed over a third of girls aged between seven and 10 believed looks were a woman’s most important attribute, which she found “terrifying”.

But Eamonn told her: “I agree with you, but what I also find maybe more frightening is if you don’t reinforce that with her, somewhere in her life she will wake up, she will be 35 and she will say, ‘My mum never told me I was beautiful’.”

Clare replied: “She could obviously do that, in which case I will be forking out for a lot of therapy.

“I refuse to call my daughter beautiful” Why? One day she will look back and think not even my Mum thought I was beautiful! She won’t care at 30 that you thought she was beautiful because she was “kind to animals” 😕💕 #thismorning

“I dont tell my daughter she is beautiful” on #ThisMorning why the hell not !!! I said out loud…. Then Eamon said what I was thinking … What happens when she is grown and ask you why.. The response from the mother was “then I have a big therapy bill! come on now .. tell her

Ugh this woman! Bore off, you ‘right on’ wannabe! What the hell is wrong with a bit of balance?! My mum told me I was beautiful AND clever, and I’m glad she filled my formative years with love and praise of all kinds. #ThisMorning

Whaat if someone says something horrible to her at school? She can’t even respond with ” well my mummy says im beautiful” #thismorning

Sorry I don’t agree with this if I had a daughter I would be telling her every day before school you look beautiful. Instead I have a son and say every day you look smart and handsome. Building up body confidence from a young age is key. #thismorning

Stop passing your own issues on to your kid! You’re the one who should be having some therapy I think #ThisMorning

Do you think Clare is right or wrong? Leave us a comment on our Facebook page @EntertainmentDailyFix and let us know what you think!