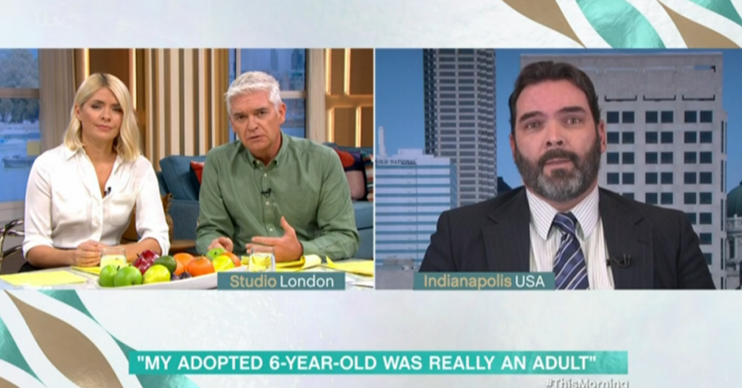 Viewers were left “speechless” after a man appeared on This Morning and revealed that a six-year-old girl he adopted in 2010 was actually a 22-year-old woman – who then tried to kill him and his family.

Speaking to Holly Willoughby and Phillip Schofield, Michael Barnett revealed that alarm bells should’ve started ringing before he and wife Christine even met Ukrainian Natalia, who suffered from dwarfism.

After their plans to adopt a child from Haiti fell through, Michael and Christine were contact by a Florida adoption agency.

Of the cold call, Michael said: “We should have noticed something was unusual.”

The agency “reached out” to the couple and said: “We have got the perfect child for you.”

Michael added: “They said: ‘It’s a closed adoption, we’re not going to give you any information about the child or the family.'”

He said they received “two pictures, a Ukrainian language birth certificate and a doctors visit from two years before” and were told: “You have 24 hours to tell us if you want to adopt her or she will be sent directly to foster care.”

Michael explained that when he, Christine and their three sons went to meet Natalia in an office at a shopping mall, she came “running in smiling form ear to ear saying Mummy, Daddy, Mummy, Daddy”.

He added: “She was just given up for adoption by her old family five minutes before that, we should’ve recognised there’s no six year old on the planet who’d be happy in this situation and immediately start referring to myself and Christine as Mummy and Daddy.”

He added: “We met her for five minutes, went and signed the papers and she was ours.”

However, soon after arriving home, they noticed all was not how it seemed and, despite claiming to be a child, they discovered that Natalia had adult teeth, pubic hair and had started her menstrual cycle.

Said Michael: “That very first night when Christine was giving our daughter a bath, she shouted to me: ‘Michael!’ I came rushing into the bathroom to find Christine as white as a ghost, she was well and truly shaken, and I said what’s wrong and Christine simply said: ‘Look.” I looked down and Natalia at age six had full pubic hair.”

Things quickly took on a more sinister turn as Natalia started to terrorise the family, threatened to stab them in their sleep, poured poison in their coffee and tried to endanger the lives of their children by throwing their toys into the path of oncoming traffic so they would chase after them.

When asked what she was doing, Michael revealed Natalia said she was “trying to kill your sons”.

Michael said: “She would put thumb tacks face up on our stairs, we would find knives under her bed and there was a moment I woke up in the middle of the night and Natalia was standing over my bed with a knife in her hand.”

The couple took her for medical tests, with a court ruling that she was, in fact, a 22 year old woman. They set her up in her own apartment – complete with nurse who would make sure she could cope with living on her own – and relocated to Canada.

However, Michael could now face prison as, six years later, police Natalia was found living alone and charged him with neglect.

“I don’t believe that’s going to happen,” he said when asked if he thought he’d go to prison. “The charges are very easy for us to defend.”

He added: “The fact is, three times in court, Natalia has been ruled a fully grown adult. Why the police are charging us with such things I have no idea.”

Viewers were quick to comment on the story, with some left godsmacked and others thinking the story was faked.

Good god!! This is messed up!! #ThisMorning

Oh my gosh, imagine adopting a six-year-old “little girl” thinking that you are going to have your own little family finally and then finding out that she is actually a grown adult, who tries to kill you all.@Schofe @HollyWills

What a great story time, so much detail I’m almost questioning how long he’s had to make this stuff up 🤔 #thismorning

I really don’t think this is true for the following reasons:

Surely you receive a birth certificate of sorts