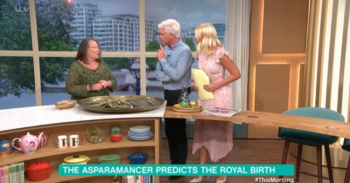 The royal baby will be born any day now

A This Morning guest used asparagus to predict when the Duchess of Sussex will give birth.

Anticipation is mounting as Meghan and husband Harry prepare to welcome their first child any day now.

During Tuesday’s This Morning, ‘Asparamancer’ Jemima Packington predicted the royal couple will welcome their baby by the end of April – and they could even have twins!

Read more: Holly Willoughby shows off radiant tan as she returns to This Morning after Easter break

Psychic Jemima claims she can “see into the future” by throwing the vegetable onto a tray.

As she threw several pieces of asparagus onto a gold tray, one stem fell onto the floor and Jemima said it meant “celebrations”.

Jemima told hosts Holly Willoughby and Phillip Schofield: “There’s a lovely ‘A’ here,” as she pointed at the asparagus.

“This means she’s going to have the baby by the end of April. It won’t be a May baby.”

Holly then pointed out a couple of pieces looked like the letter ‘N’ or ‘H’.

Jemima said: “Well, that could be a name.”

Holly asked: “Does this still say twins?” to which Jemima replied: “It does say twins. One boy, one girl.”

The world is patiently waiting for the royal baby to arrive.