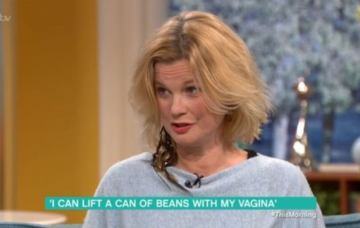 This Morning guest lifts tin of beans with her vagina, viewers make THE BEST jokes

She swung a Marmite jar between her legs too

This Morning scraped the bottom of the televisual barrel earlier, interviewing a woman who likes to lift food cupboard staples with her vagina.

Viewers either loved or hated the segment which saw her swinging first a, er, Marmite jar from between her legs and then a can of beans.

So many questions… where to begin?

Today’s hosts Eamonn Holmes and Ruth Langsford welcomed Kirsty Wright, who is purportedly in possession of the UK’s strongest vagina, to the sofa.

The mum-of-three explained that she started strengthening her vagina after she wet herself while running.

But when training her pelvic floor with Kegel exercise didn’t help, she started using yoni eggs, after a chance encounter with another mum in Waitrose.

“She just had a baby who was about one month old and said: ‘Have you heard of the jade egg?’ Kate explained.

She started out inserting a heavy egg with a string hanging out for a few minutes at a time, and then began to gradually increase the length of her sessions, until she eventually ‘wore’ one for a full day.

“Vaginas are amazing, they are flexible. Vagina muscles are squeezing to hold that in,” she continued.

“After some workouts I felt muscle soreness like you’d encounter after a gym session.

“Not only was my vagina becoming stronger but my lower back, bottom and stomach were as well.”

But how did she go from this to dangling her shopping, you may be asking?

Kate proffered how she discovered a woman in Siberia who was swinging all manner of items from her lady bits, and decided to give it a go herself.

The programme then showed footage of Kate swinging a 250g jar of Marmite, before progressing to a can of baked beans and eventually a 2kg bag.

She claims that the exercises have improved her sex life immeasurably.

“Since I’ve used the egg I’ve done a lot of self exploration and experienced vaginal orgasm for the first time,” she shared.

Predictably, the jokes were soon flying over on Twitter…

They should really start putting pockets on women’s jeans. This woman’s carrying stuff about with her vagina #ThisMorning pic.twitter.com/VnKHUKjr82

I suppose hanging your shopping from your vagina is one way to beat the 5p plastic bag charge innit? … #ThisMorning

#ThisMorning
Just caught the end of an interview on This morning……
A woman claims she can pick up a tin of baked beans, easy eh?…With her vagina!!!!
She must be hilarious to follow around Tescos!!

Would you ever consider wearing eggs to strengthen your vagina? Leave us a comment on our Facebook page @EntertainmentDailyFix and let us know what you think!