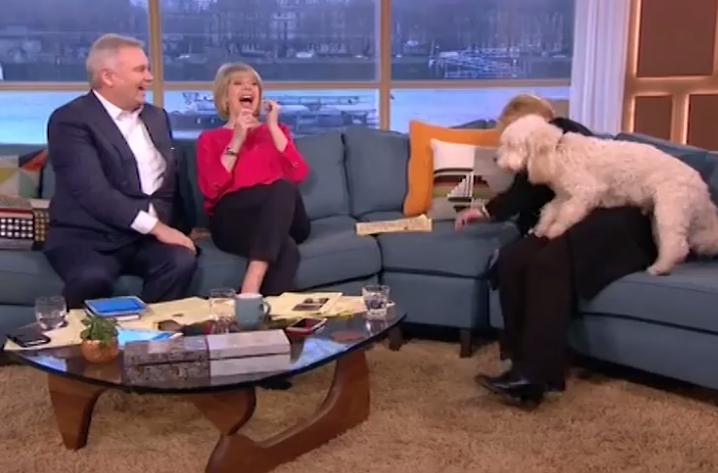 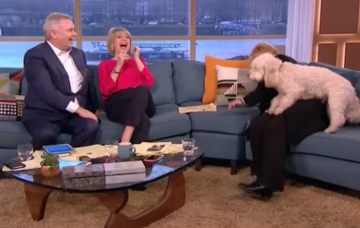 Eamonn and Ruth didn't know where to look!

If there’s one thing history has taught us, it’s that animals have their own agenda whenever they appear on live TV.

But that didn’t stop Brenda Blethyn from looking visibly shocked as her pooch pulled a sudden manoeuvre during an appearance on today’s This Morning.

The veteran actress had been talking to Eamonn Holmes and Ruth Langsford about the next series of ITV drama Vera when her dog Jack attempted to HUMP her in front of the cameras.

And the impromptu stunt left the presenters – and the viewers at home – in fits of laughter.

As the interview drew to a close, Eamonn made a joke of the fact that both he and Brenda, 71, are now OBEs.

Brenda was given the award back in 2003, with Eamonn getting his in the most recent New Year Honours.

The 58-year-old presenter smiled: “There’s not many of us around. We should have a secret handshake.”

But before Brenda had a chance to respond, Jack – who’d been minding his own business beside her – suddenly decided to get frisky.

In a flash, he leapt onto his shocked owner and started grinding himself against her arm.

Brenda yelled: “Jack!” before adding: “Was that on the television?”

Ruth, 57, raised her hand to her mouth and struggled to control her giggles, before finally regaining her composure to splutter: “He does love you, doesn’t he!”

Brushing herself down, the actress replied: “I apologise for Jack.”

But the ordeal wasn’t over yet for the shaken guest.

As she attempted to leave the studio, Jack clung on to her leg and continued his amorous advances, while Eamonn and Ruth roared with laughter on the sidelines.

And they weren’t the only ones who were clutching their sides – viewers at home were, too.

One tweeted: “@BrendaBlethyn Crying at you getting humped by your dog on @itvthismorning. Sooo funny. I love you ha. Handled it so well. Got to love live telly ha ha!”

Another said: “Just flicked over to This Morning to see Brenda get humped by her dog Jack on the sofa. Made my morning!”

And a third chuckled: “Just so funny. I love @BrendaBlethyn so much anyway, but now I love her dog as well.”

Eamonn added: “The whole way up the corridor, incidentally.”

Well, they don’t call dogs ‘man’s best friends’ for nothing!