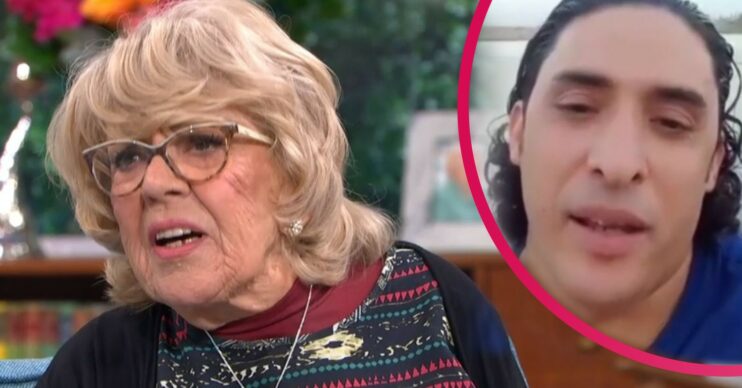 Iconic This Morning guest Iris Jones returned to the show this week and stunned viewers once again with a very x-rated confession.

Last January, Iris went viral after her appearance on the programme after describing her sex life with her Egyptian partner Mohamed Ahmed Ibrahim, 36, in graphic detail.

They tied the knot later in the year, but visa issues have kept them apart for nine months.

Iris appeared on Wednesday’s show  (September 8) and explained to Holly Willoughby and Phillip Schofield the struggles of being away from her husband.

Iris on This Morning

The star, who is celebrating her 82nd birthday today, said: “I’m missing him all the time. It’s like an emptiness, when you love someone you want to be with them.

“We’re a married couple but we’re not together.”

Phil then told Iris that she and Mohamed should have some solution to their visa issues by November 4 after having a statement from the Home Office.

Iris said: “Oh that makes me feel a lot better.”

Going on to discuss the couple being away from each other, Holly later asked Iris how she and Mohamed “keep the romance alive”.

That’s when Iris made another cheeky admission.

She said: “My skin is very thin, it’s like tissue and Mohamed has got to be careful when he grabs hold of me because he rips my skin.

“The skin on my legs is very, very thin and when it comes to making love, it can be painful.”

Iris continued: “I can end up at the A&E with skin rips. But we solved that problem because we sometimes do it doggy fashion.”

Phil and Holly looked stunned as he said: “Yeah that makes it a lot easier. No one wants to end up in A&E afterwards do they!”

The show then celebrated Iris’ birthday today and Mohamed sent in a video message for his wife.

In it, he said: “Hello Iris, I miss you really. Happy birthday, my wife.”

Getting emotional, he said: “I miss you, Iris.”

Viewers were left cringing over Iris’ sex confession on Twitter.

One person said: “Oh Iris. Please make it stop,” followed by a GIF of a man gagging.

Read more: This Morning: Miriam Margolyes tells Phillip Schofield why she knew he was gay

Another wrote: “Don’t know why they keep bringing Iris and her Egyptian lover/husband. Cringe every time she opens her mouth.”

A third added: “I’m so glad I’ve not had my breakfast. I really didn’t need to know she ends up in A&E after she’s had sex so they now do it doggy style.”

However, others loved Iris’ appearance on the show and defended her.

One person tweeted: “Good for you Iris.”

Another said: “I’m OBSESSED with Iris!”

Another added: “If Iris is happy that’s all that matters.”