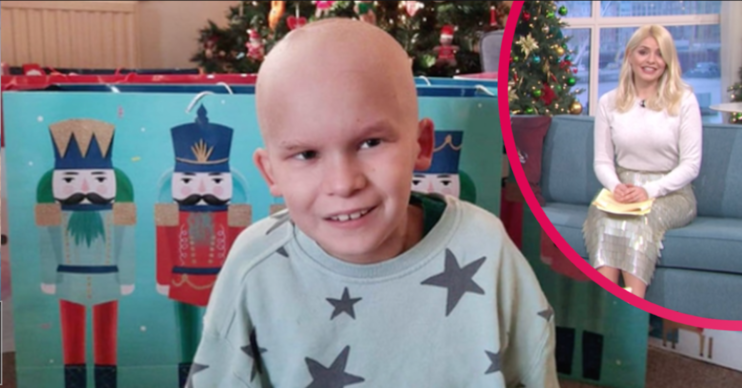 The youngster touched the hearts of ITV viewers today

Elliott Furse left This Morning viewers in tears after donating his Christmas presents to children in hospital.

On today’s show (December 8), hosts Holly Willoughby and Phillip Schofield caught up with eight year old Elliott and his parents.

Opening the segment, Holly revealed it all started in 2018 when the youngster decided to donate his Christmas presents.

Elliott’s parents gave him money to buy gifts, which he delivered to hospitals himself.

However, earlier this year, the youngster went into hospital after being diagnosed with a brain tumour.

His parents began to feel concerned for their son’s health in July.

Mum Samantha explained: “He started not being able to walk properly and he was very wobbly on his feet.

“It was quite worrying to watch and it got to the point where he collapsed after a family holiday.”

She added: “Within a few hours he was diagnosed with having a brain tumour.”

From there, Elliott lost the ability to walk and talk.

Despite his own struggles, Elliott has continued with his selfless mission.

What did viewers say about Elliott?

This Morning fans flocked to Twitter to praise the little boy.

Elliott is such a kind little boy. Get well soon.

One said: “Elliott on #thismorning. Wow. What a lovely little boy. Imagine knowing you brought that little boy up with those amazing values Sparkling heart what a superstar !!”

A second commented: “Elliott is such a kind little boy #crying #thismorning.”

A third added: “My heart melts for little Elliott.”

“What a brilliant young man,” another added.

Elliot is such a kind little boy 🥰 Get well soon Elliot!#crying #thismorning

Oh my god Elliot on @thismorning is absolutely amazing, what a brilliant young man and lovely family 💕

Elliott and his family are absolute heroes ❤️ #ThisMorning

A fourth tweeted: “Oh my goodness – Elliott on @thismorning – what an amazing little boy Red heart Speedy recovery sweetie; you have the kindest heart.”

Later on in the show, Holly and Phillip revealed they were so moved by Elliott’s story, they decided to dedicate their Spin To Win segment to the youngster.

Elliott and his family went on to win a whopping £3,000 in the prize draw.