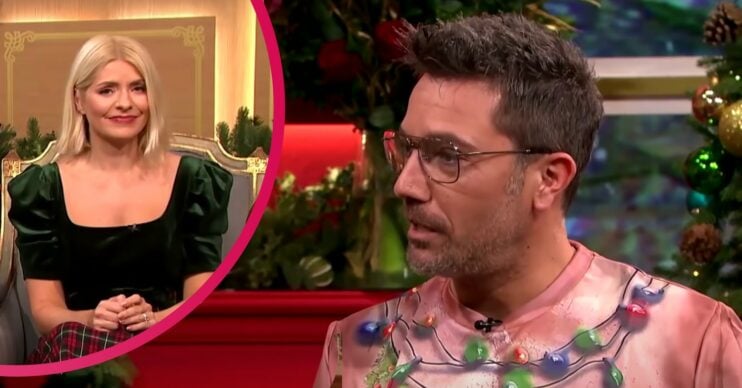 Viewers reminded the star he wasn't on Celebrity Juice...

Gino D’Acampo has come under fire from This Morning viewers for a comment he made to Holly Willoughby.

The 45-year-old’s “smutty” quip came during the show’s festive special on Christmas Day.

Gino D’Acampo was accused of lowering the tone of the This Morning Christmas special with his comment to the show’s co-host, Holly Willoughby.

Holly and Phillip Schofield returned to the show on Saturday to host the Christmas special. During the show, Josie Gibson made an appearance to play some festive games with Phil, Holly, and Gino.

The presenters had to wear the belt around their waist, then without using their hands, squat down and try to get the pen into the bottle.

Phill, Holly, Gino, and Josie all had a go at trying to get the pen into the bottle. It was at this point when Gino made his lewd comment.

What did Gino D’Acampo say to Holly?

As Holly tried to get the pen in the bottle, Gino came out with a comment that shocked viewers.

Holly just laughed, but no one else seemed to pay attention to what Gino had said. Gino then tried again as Holly continued to struggle with the party game.

Many viewers of This Morning were unimpressed with Gino’s comment towards Holly. Some took to Twitter to slam the 45-year-old Italian chef.

“Phil & Holly totally ignoring Gino D’Acampo when he told Holly that he’d give her £10,000 if she could make the bottle disappear. He just can’t resist any opportunity to be smutty!” one viewer ranted.

Another viewer accused Gino of lowering the tone of the show with his comment. “Time this unnecessary content & those who deliver it are dropped from a daytime show,” they said.

“Gino D’Acampo is a bit offensive with his comments about the bottle and Holly, yuck,” a third said.

“[Bleep] me Gino ‘I’ll give you £10k to make the bottle disappear Holly’ calm down it’s not Celebrity Juice you [bleep],” another angry viewer said.

Not everyone hated Gino’s comment though. A couple even found it funny.

“Can’t believe Gino just said to Holly I’ll give you 10 grand to make the bottle disappear,” one viewer laughed.

Another viewer said that they’d spat their wine everywhere at Gino’s comment.

Despite Gino’s comments, the stars continued playing Christmas games, and even ended up doing shots at the end of the segment!

What did you think of Gino’s comments to Holly? Leave us a comment on our Facebook page @EntertainmentDailyFix and let us know.