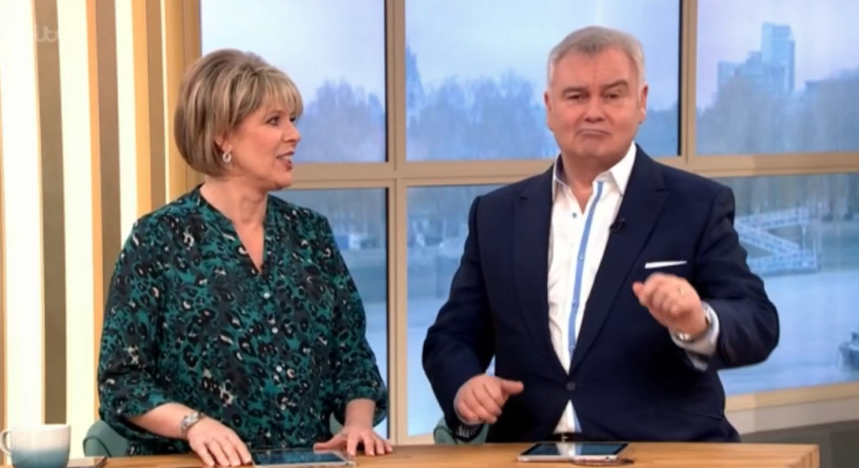 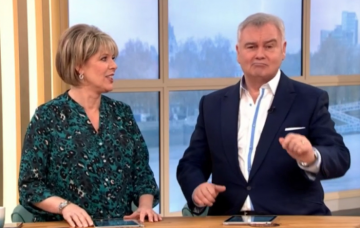 She just laughed it off!

Eamonn Holmes cracked a joke about his wife Ruth Langsford on Wednesday’s This Morning but it didn’t go down well with some viewers.

The couple were discussing their New Year’s resolutions when Ruth, 58, revealed hers is to get healthier and lose weight.

Ruth said she has an app on her phone to help her achieve her goals and Eamonn couldn’t help but make a joke.

“She’s got one of these app things that told her how many calories she’s restricted to, bearing in mind her bulk, and how much intake she can have during the day,” as Ruth burst into laughter.

Eamonn then joked: “That’s because you’re very fat. That’s why.”

Laughing, Ruth replied: “You’re going to get, ‘Eamonn stop being horrible to your wife!'”

Continuing his joke, Eamonn quipped: “I’m only stating a fact.”

One person said: “Eamonn I can’t believe you called Ruthie fat! She is lovely and I think you and I both know you are punching above your weight!!! Ha ha.”

Eamonn I can’t believe you called Ruthie fat! She is lovely and I think you and I both know you are punching above your weight!!! Ha ha x

Another wrote: “Eamon only managed to last 4 minutes before making a derogatory comment to Ruth. Bored of seeing their boring relationship. Switched off.”

Eamon only managed to last 4 minutes before making a derogatory comment to Ruth. Bored of seeing their boring relationship. Switched off.

Fancy calling your wife fat on TV eamonn .show her up abit more

Others, meanwhile, were thrilled to have the duo back on their screens.

One person said before the show: “Can’t wait to watch you and Ruth on This Morning, Eamonn… love you both.”

“That’s good Eamonn, prefer you and Ruth hosting it,” another said.

Earlier in the show, Eamonn and Ruth opened up about how they celebrated the new year.

Eamonn said: “You lot would think that me and her, being showbiz inclined, that we would be out [partying] somewhere, but…”

As a photo popped up showing Ruth kissing her sleeping husband on the head, Eamonn added: “That’s me asleep on the couch with Ruth waking me up to say, ‘darling, it’s about to strike midnight.'”

Ruth joked: “We feel so old and sound old!”

How did you celebrate NYE? Leave us a comment on our Facebook page @EntertainmentDailyFix and let us know!