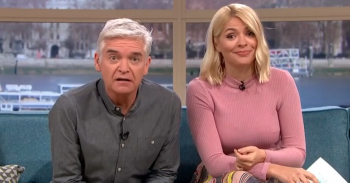 Have you tried "chuffing" with your domestic pets?

Filthy-minded This Morning viewers were in hysterics earlier today as the show’s hosts unwittingly – and repeatedly – used some very rude slang.

Presenters Holly Willoughby and Phillip Schofield were also tickled by the term “chuffing” – a euphemism often used in place of a swear word, especially in Yorkshire.

But Hols and Pip were using the word to describe a unique form of communication Dr Scott – the show’s animal expert – utilises to communicate with tigers.

As Holly detailed that production staff had found stunning footage of Dr Scott happily “chuffing” away with a big cat, Phil explained the shallow snorting sound being heard was a non-threatening vocalisation used by tigers during courting or when they comfort their cubs.

It can also be used by staff looking after tigers as a form of affectionate greeting.

A giggling Holly reflected: “How sweet is that?”

She also promised to try the technique out on her own pet moggy, urging viewers: “If you’ve got a cat at home, try it!”

“Try chuffing with your cat,” Phillip encouraged as he and his co-star batted the word back and forth a few more times.

Dozens of those watching at home did just that, sharing the – very mixed – results on Twitter.

But some This Morning fans were familiar with another apparent meaning of the term which refers to a sex act.

And several of those viewers couldn’t contain their glee at the show’s hosts saying the word over and over again.

One fan reckoned Pip and Hols were being wound up by production staff backstage who knew what they were doing.

@thismorning @Schofe @hollywills no chuffing does not work with cats, mine has just turned his back to me in disgust 😂😂

@thismorning just tried chuffing with my cat. He couldnt have cared any less of he’d tried 🤦‍♀️

Too busy to chuffing chat @thismorning Melanie and Suzie pic.twitter.com/OKt2mwjAUS

They tweeted: “The gallery are taking the [blank] aren’t they? ‘Yeah Holly say chuff, its definitely called chuffing. Say chuff on air’.”

And a third person who seemed to au fait with the naughty term, added: “😂🤣 do Holly & Phil ever hear ‘stop it, behave!’ in their earpieces?!”

@thismorning this was my cat Dora’s face when trying #chuffing she wasnt impressed…. my dog on the other hand loved it 😂 #noloyalty @Schofe @hollywills pic.twitter.com/jPLzLUx60u

@thismorning I’ve been chuffing with my cat, not sure if she likes it or she’s looking at me thinking I’ve lost my marbles