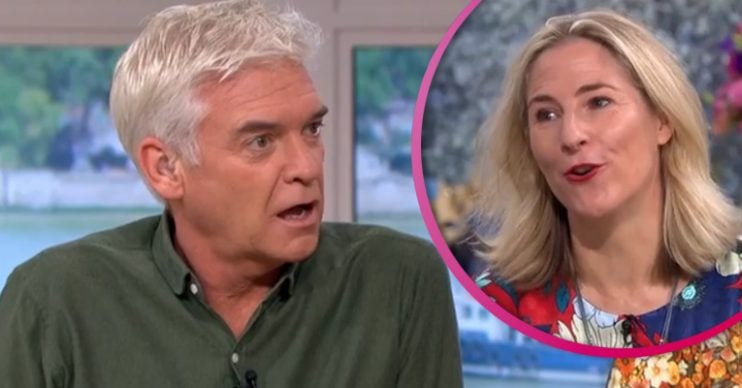 He was completely stunned by her revelations

Viewers of This Morning were left in fits of laughter over Phillip Schofield‘s question to a relationship coach.

Intimacy expert Camilla Constance appeared on Wednesday’s show to discuss how she helps others fulfill their sexual needs.

Camilla revealed she was married but she and her husband “drifted apart” and were sleeping in separate bedrooms.

Camilla said they were “too far apart to pull back together again”.

Revealing she had multiple relationships, Camilla said: “I was living with the husband, in a relationship with Neil and then enjoying Simon inbetween times.”

During that time, Camilla was having threesomes and experimented with women.

Camilla revealed she sits cross-legged on the couple’s bed and watches them.

She explained: “I sit cross-legged and I hold the energy. I love holding the space for a couple.”

Phil was left utterly stunned by Camilla’s revelation and joked: “Do you just hold the space or do you hold anything else?”

Camilla said: “Hold the space. Sometimes I will show people how to touch.”

Phil then asked: “Do you get off on it yourself? You never sit there going, ‘that looks good.'”

‘Why, do you want to book it?’ – @hollywills #ThisMorning pic.twitter.com/k0Go58uuyN

Camilla replied: “No. I get utterly delighted and thrilled by people reconnecting.”

Viewers were amused by Phil’s question.

One person wrote on Twitter: “‘Do you get off on it, oh that looks good’ @Schofe classic!”

Another said: “Do you get off on it says Phillip Schofield,” followed by laughing face emojis.

“Do you get off on it,,oh that looks good” @Schofe classic….#ThisMorning

Do you get off on it

A third tweeted: “Phil you legend, so funny lol.”

Phil you legend 😹 so funny lol

Read more: This Morning and Loose Women cancelled AGAIN this week for rugby

At the end of the interview, Phil asked: “How much does it cost by the way?” to which Holly Willoughby joked: “Why, do you want to book it?”