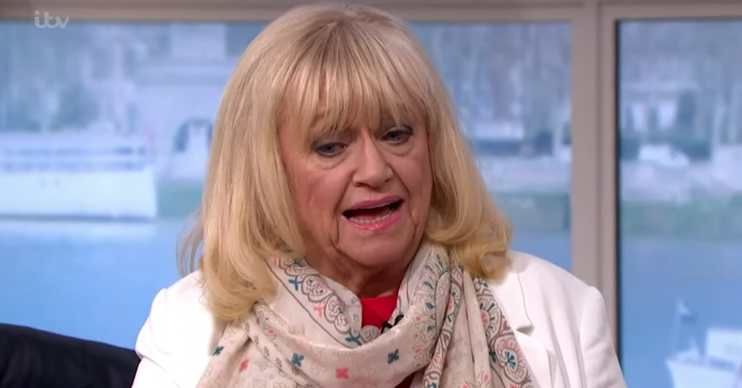 Telly viewers couldn’t believe what they were seeing on their screens as host Judy Finnigan appeared to give her toes a good scratch live on air during This Morning earlier today.

The presenting star, 71, was back on the box with husband Richard Madeley to anchor Friday’s episode of the ITV daytime flagship show.

The duo had promised fans they would be back to front the programme they previously helmed for 13 years after it launched in 1988 in a comeback appearance last October.

Richard opened the show: “We did warn you, we said we would come back.

“Hello and welcome to your Friday This Morning with Richard and Judy.”

And while many of those watching at home were thrilled to see the couple again, one moment during a chat with Ant and Dec left some observers completely gobsmacked.

Someone tell Judy not to pick her feet on telly.

At one point during a segment with the Geordie stars, Judy pulled off her shoes and jumped into a buggy with Richard to go to the Saturday Night Takeaway studio.

And just moments later, viewers noticed she looked to be ‘picking’ at her toes during a brief chat with the I’m A Celebrity and Britain’s Got Talent presenters.

“Judy picking her toes in the buggy! #thismorning” exclaimed one person on Twitter.

“Was Judy really picking her toes while talking to Ant & Dec?! #ThisMorning,” tweeted another, tagging their post with a queasy emoji.

Another shocked onlooker reflected: “Oh my days, why was Judy picking her feet live on #ThisMorning?!

“So gross, feel ill after watching that.”

“Someone tell Judy not to pick her feet on telly,” demanded someone else, picking up plenty of Likes from others in agreement.

However, someone else reckoned the bizarre moment made for great TV.

“Judy picking her feet in a golf trolley. Highlight of the day.#ThisMorning,” they wrote.

And another viewer joked: “I’d rather watch two hours of Judy picking her feet in ultraHD than ant n dec. #ThisMorning.”

This Morning airs on ITV, weekdays at 10am.