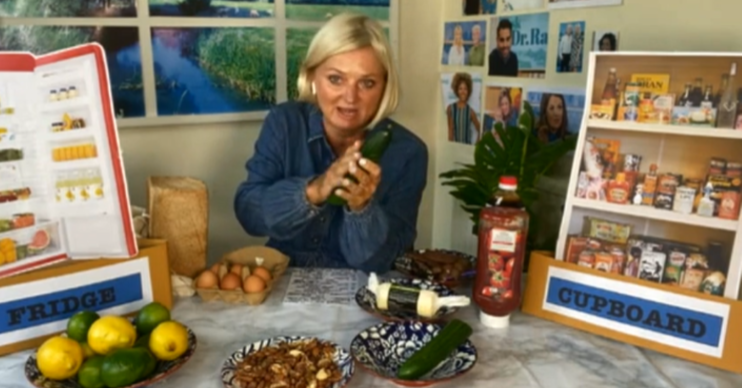 And eggs in the fridge!

Alice Beer left This Morning viewers aghast today during a segment on what foods should be kept in the fridge.

Not only did she tell us we’re putting our cucumbers and eggs in the wrong place, but she made plenty of innuendos while doing it!

Alice revealed to hosts Holly Willoughby and Phillip Schofield that a graphic doing the rounds on Facebook has shown that we’ve been putting the wrong things in our fridge all these years.

Where do citrus fruits belong?

Alice, who also keeps them in a bowl, said: “The fruit bowl is the worst possible place you can keep them, Holly, we are doing it wrong.

“Because they like a cold temperature and they’re going to last much longer if they are in the fridge, it’ll slow down the rippening process, basically.”

However, it was the next item on the menu that really had viewers – and Holly and Phil – up in arms.

Cucumbers! “Where do you stick your cucumbers?” Alice asked.

Cucumbers should be WHERE?!

“In the fridge? Me too, that’s where I’ve been keeping my cucumber and you’d think I’d know at the age of 55, but no, I’m really sorry, the College of Agricultuire and Environmental Sciences has said that they should be kept at room temperature.”

Outraged Holly cut in: “Hang on a second, my fruit bowl’s going to have cucumbers sticking out of it and my lemons will be in the fridge, the world’s gone mad!”

Alice continued: “If you leave a cucmber at less than 10 degrees celsius for more than three days it will get cold injury. It’ll start to decay.”

Viewers couldn’t believe their ears when they were told to keep their cucumber in bowl at room temperature instead.

When you think 2020 can’t get any weirder, you find out that cucumbers don’t belong in the fridge and bread isn’t meant to live in a bread bin… #thismorning

Cucumbers don’t go in the fridge? What Is this witchcraft!!! #ThisMorning

A little bit of innuendo

However, it was Alice’s jokes and innuendos that had fans questioning whether she was okay. Some even thought she’d been drinking before the segment!

“Cucumbers are ethylene sensitive, so basically Philip you want to keep your cucumber away from Holly’s melons because that would make it ripen muich quicker,” she quipped, leaving Holly and Phil pretty speechless at the suggestion.

In the next breath, Alice was chatting about eggs and she said: “Where do you keep your eggs? Apart from in your ovaries?”

She proceeded to talk about her love for eggs: “I’m afraid the most important thing for these little wonderous things – I’m quite obsessed with eggs, I love them, I think they are so beautiful – is that they have to have consistency and stability of temperature because it’s the fluctuations in temperature that put them at risk from salmonella.”

She concluded they belong in the fridge.

People began to wonder if ‘lockdown had got to Alice’ by this point!

I think lockdown has got to Alice 🤦🏼‍♀️ #ThisMorning

Where do you keep your eggs apart from in your ovaries? 🙄 She’s lost it. #thismorning

What is with alice this morning 😭😭 ‘where do you keep your eggs? Apart from in your ovaries’ sorry what #thismorning

Alice. Is . Off. Her. Rocker #ThisMorning

Think Alice has been on the cooking sherry, more innuendos that a Nigella segment today! #ThisMorning

Think alice has been on the gin #ThisMorning

Other foods she talked about included keeping bread in the fridge and butter out of it! Plus nuts should be in the freezer!

Where do you keep yours?