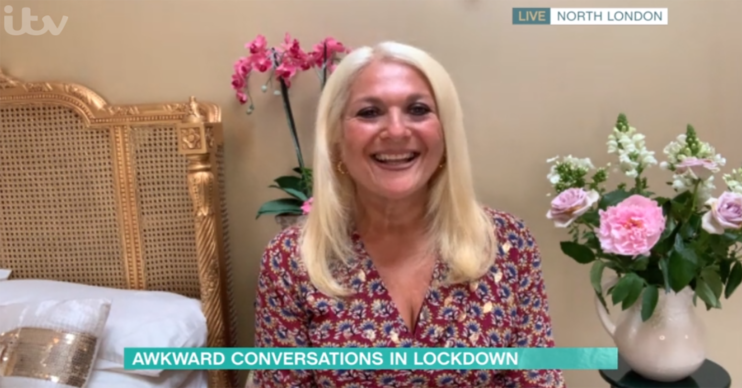 Vanessa Feltz has left This Morning viewers grossed out after discussing her sex life.

The show’s agony aunt was giving advice to a viewer after Boris Johnson announced the introduction of new support bubbles.

He said in a briefing: “From this weekend, we will allow single adult households, living alone, or single parents with children under 18, to form a support bubble with one other household.”

Read more: Dr Hilary warns if there’s going to be second coronavirus wave it will happen ‘in next two weeks’

She called in to ask if she was being selfish for picking to form a support bubble with her lover rather than her grandchild.

What did Vanessa say?

Vanessa said: “Lots of people would say, moving in with your lover sounds heavenly but in real life it takes a maximum of what three and a half minutes.

“There’s an awful lot of time that you’re with your lover when you [could be with] your grandchildren.

“They are long-term company once your urges have been satisfied.”

Phil and Holly burst into laughter as she said: “Vanessa the undresser strikes again.”

Vanessa continued: “You’ve got sex on the one hand, how gorgeous how wonderful, how marvellous, to feel female, and wanted and human.

“You must have been missing it, agonisingly.

“But on the other hand the grandchild the fruit of your loins the light of your life. This is an impossible choice.

Meanwhile, she added: “I would choose my grandchildren. I love sex, I love Ben [her husband], I adore it, I used to be called Vanessa the undresser at school.

However, viewers were cringing over Vanessa’s comments.

One person said on Twitter: “Far too much information Vanessa.”

In addition, another wrote: “Thanks for that image Vanessa,” followed by a sick face emoji.

A third added: “‘Vanessa the undresser’??!! I’m suddenly filled with horror and the fruit of her loins speech.”

What do you think of the latest lockdown measures? Visit our Facebook page @EntertainmentDailyFix and let us know.