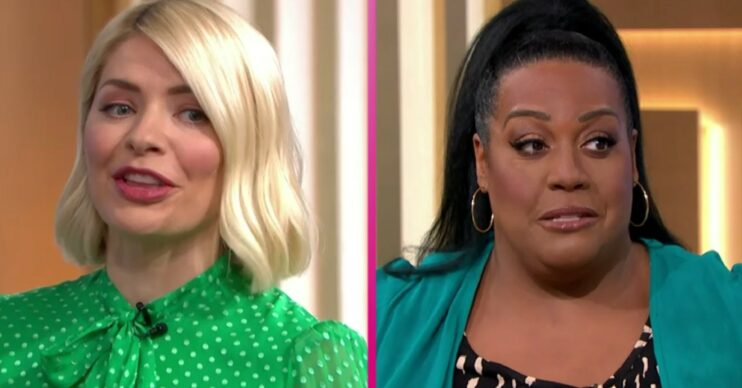 Holly was joined by a new co-host today

This Morning was hit with another shake up as Alison Hammond joined Holly Willoughby on today’s show (February 7).

The presenter, who usually hosts alongside Dermot O’Leary, was called in to replace Phillip Schofield as he recovers from COVID-19.

Holly appeared delighted as she opened the programme with Alison today.

And while Phillip may not have been in the studio, he did briefly appear on the show.

Read more: Phillip Schofield pulls out of This Morning tomorrow due to Covid

“A week ago I had a slightly scratchy throat for an hour which prompted me to test and it came back positive and it’s been positive ever since.

“But I feel great, I’ve ploughed my way through boxsets. I’ve been cooking, I’ve been wandering around thinking what should I do next.

“I sat in the garden for half an hour because the sun came out.”

Holly went on to admit that she nearly sent her dog over to keep Phillip company.

The star said: “I nearly sent the dog over to your house yesterday because you were alone. But then I thought maybe Bailey could get COVID and give it to me.”

As Holly and Alison continued to host the show, viewers were quick to give their verdict.

Many rushed to Twitter to praise the pair together.

One said: “I’m loving Holly and Alison on This Morning #ThisMorning.”

A second tweeted: “I am so enjoying Holly and Alison, great fun.”

I’m loving the Holly and Alison on this morning ❤️ #ThisMorning

Right, well, Alison can stay! Don’t get this with Phillip… 😍 pic.twitter.com/liJLqC4WVu

I am so enjoying holly and Alison , great fun 🤩

Alison Hammond has really grown in confidence over the last few months. Her and Holly this morning are so much fun – both completely at ease with each other. #ThisMorning

It's all me me me with her

Alongside a fun TikTok video of Holly and Alison, a third added: “Right, well, Alison can stay! Don’t get this with Phillip…”

Another added: “Alison Hammond has really grown in confidence over the last few months. Her and Holly this morning are so much fun – both completely at ease with each other #ThisMorning.”

A sixth penned: “Holly’s a bit more bearable partnering up with Alison #ThisMorning.”

However, others called for Phillip to return to the programme.

One posted: “Oh no not Alison today. Nope. Get well soon please Phil.”

Another tweeted: “I don’t feel like Alison and Holly work well together #ThisMorning.”