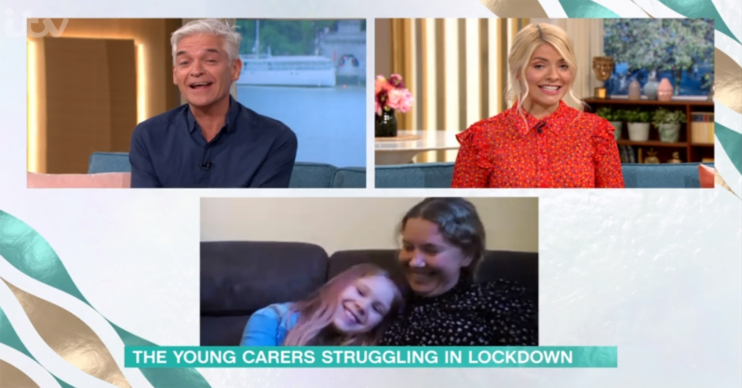 Phoebe, eight, looks after her mum and sisters

Viewers of This Morning have been left emotional over Holly Willoughby and Phillip Schofield‘s gift to a young carer.

Phoebe, eight, looks after her mum Charlene, who has ARVC disorder.

The little girl said she does everything around the house from cooking tea to giving her two sisters Olivia, six, and Emily, four, baths.

Read more: Phillip Schofield and Holly Willoughby in hysterics on This Morning as BGT dog Miracle runs riot during interview

Charlene revealed her disorder means she gets tried easily and can become breathless.

Due to the coronavirus pandemic, Phoebe is looking after her mum since the carer who usually comes in can’t.

This shields Charlene from the virus.

What has Phoebe said?

Phoebe told Holly and Phil: “I do the stuff that mummy can’t do when she’s breathless like putting the laundry in the washing machine.

“Hoovering and sometimes even the washing up.”

She continued: “I wash my sisters’ hair and I bathe them and I do a lot of cooking.

“My favourite things to cook are pastas, beans on toast and cakes.”

Charlene said: “It’s so important, I struggle every day and she’s been amazing and she just gets on with it, she doesn’t complain.”

Holly and Phil’s gifts for Phoebe

Meanwhile, Holly and Phil said they wanted to give Phoebe a gift.

Phil told her: “We’ve got a present for you Phoebe, if that’s alright?”

The pair gifted her with a brand new laptop to help her with her homeschooling.

The little girl smiled as she said: “Thank you.”

They also gave her a Harry Potter Lego set, which hasn’t even come out yet.

I wash my sisters’ hair and I bathe them and I do a lot of cooking.

Holly told her: “That’s a little way for us to tell you thank you but also, it’s your birthday coming up isn’t it, in June.”

Viewers praised Phoebe on Twitter and gushed over the gift.

One person said: “Phoebe George you are amazing! Well done you.”

Phoebe George you are amazing! Well done you 👏🏼 👏🏼 #ThisMorning #YoungCarers

Another wrote: “That little girl is incredible!! I’m literally crying over her receiving gifts.”

A third added: “Aww bless hard enough being an adult carer, but young carers,” followed by a crying face emoji.

Head to our Facebook page @EntertainmentDailyfix and leave a comment to let us know what you think of this story.