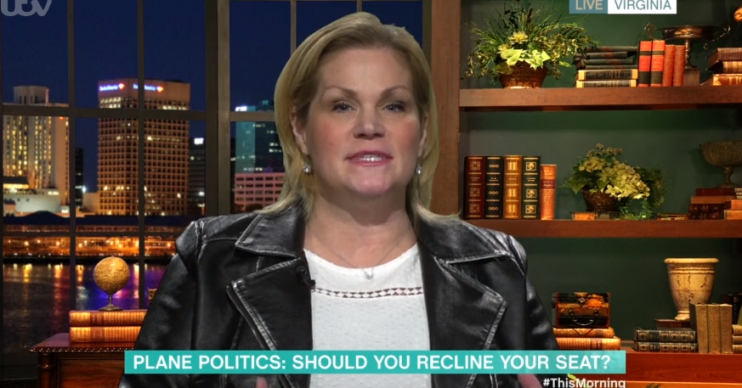 This Morning fans divided over woman who reclined seat on flight

Viewers of ITV’s This Morning were left divided on Wednesday over an incident that involved a woman’s reclined airplane seat being repeatedly punched by another passenger.

The man in question was sitting on the back row and unable to recline his own seat as a result.

Wendi appeared via a video link on This Morning to go over the incident and how she hopes it will be resolved.

@BravoAndy Here’s a great jackhole! He was angry that I reclined my seat and punched it about 9 times – HARD, at which point I began videoing him, and he resigned to this behavior. The other jackhole is the @AmericanAir flight attendant who reprimanded me and offered him rum! pic.twitter.com/dHeUysrKTu

She explained to hosts Holly Willoughby and Phillip Schofield that she had obliged to put her seat back up while the passenger behind ate.

However, when she reclined once he had finished eating, the man began to incessantly punch at her seat and make sarcastic remarks.

She explained: “At which point, there was no conversation he just started punching, not what you see in the video, but full on punching to where I was flying forward.”

Never one to avoid playing devil’s advocate, Phillip asked why didn’t she simply put her seat back, but she replied that she was “in too much shock” and also that a reclined seat helped relieve her ongoing back pain.

She went on to describe how the female flight attendant appeared to be fully on the male passenger’s side, and that she even asked her to delete the video.

She continued: “It was very clear from the moment I got her attention she was on his side.

“Another eye roll and going back to him, changing personalities and saying ‘It is tight back here, I’m sorry’.”

Now a legal case, Wendi is taking the incident to court in an apparent bid to win compensation for her unfortunate experience.

But viewers appeared a bit divided over the claims, with some defending the man in question.

One viewer tweeted, “100000% a [expletive] if you recline your seat on a plane. End of conversation, no respect and selfish #ThisMorning.”

Another claimed, “#ThisMorning The woman on the plane should have got up and asked her fellow passenger what the issue was rather than just video him. It’s just courtesy to do so and did she really need to recline her seat?”

Read more: Phillip Schofield asks if he should be in isolation over coronavirus fears

And a third argued: “#ThisMorning I always ask the person behind me before putting my seat back! Just being polite!”

A further viewer argued that the disgruntled man could have simply asked her to put her seat back: “#ThisMorning he should have said can you please not recline your seat I don’t have a lot of room back here because being at the back of a plane is quite tightly spaced.”

But others seemed firmly on the woman’s side.

One wrote: “#ThisMorning she was polite and put her seat back up while he was eating. She only put it back after he finished.”

Another slammed the male traveller as a “brat” with: “The lady put her seat upright while the passenger behind was eating, that’s courtesy, the guy behind was being a brat when he started punching the back of her seat. The flight attendants weren’t any help either! #ThisMorning.”