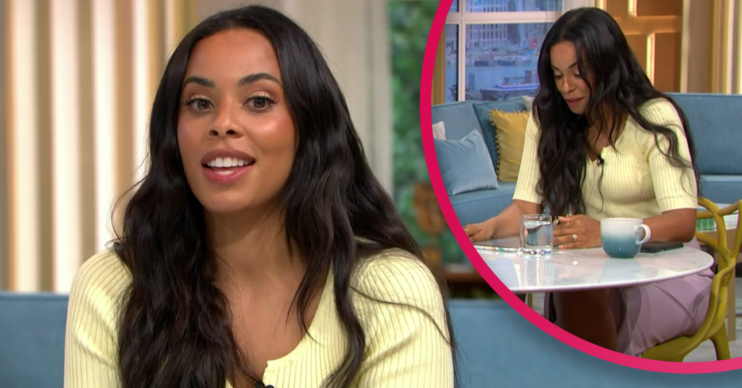 She presented alongside Eamonn Holmes today

Rochelle Humes hosted This Morning alongside Eamonn Holmes today (August 30) – and fans of the show have delivered their verdict.

Mum-of-two Rochelle was due to host the show alongside Vernon Kay today.

However, after he tested positive for COVID-19, Eamonn Holmes stepped in.

And, while some loved the pairing, others picked up on a habit of Rochelle’s that drove them “mad”.

The comments came as Rochelle and Eamonn hosted a segment on the Stephen Lawrence murder case and the show Stephen that airs tonight.

And, while interviewing Det Chief Insp Clive Driscoll, some picked up on a habit of Rochelle’s that they said was “really grating” on them.

“Why does Rochelle keep saying ‘you wasn’t’? It’s driving me mad,” said one viewer.

“Could someone tell Rochelle it’s ‘you weren’t’ not you WASN’T!! Drives me mad,” echoed a second.

“Rochelle saying ‘wasn’t there’ when it should be ‘weren’t there’ is really grating on me. I’m not usually one for grammar police but it’s sticking out and offending my ears,” a third commented.

“I wince every time I hear that as well,” said another in response.

‘Is there anything Rochelle can’t do?’

However, for every mean comment others were thrilled to see Rochelle fronting the ITV daytime show.

Fans also picked up on the apparent chemistry between Rochelle and co-host Eamonn, who is usually paired with wife Ruth Langsford.

Read more: This Morning fans threaten to ‘switch off’ over Eamonn and Ruth’s departure

“I bet Eamonn is loving presenting with Rochelle. They seem fond of each other,” one This Morning fan commented.

“ROCHELLE yay,” said another at the top of the show.

“Rochelle – pop singer, chef, TV presenter… Is there anything she can do?” another Rochelle fan tweeted.

Head to our Facebook page @EntertainmentDailyFix and tell us what you thought of Rochelle and Eamonn on This Morning today.