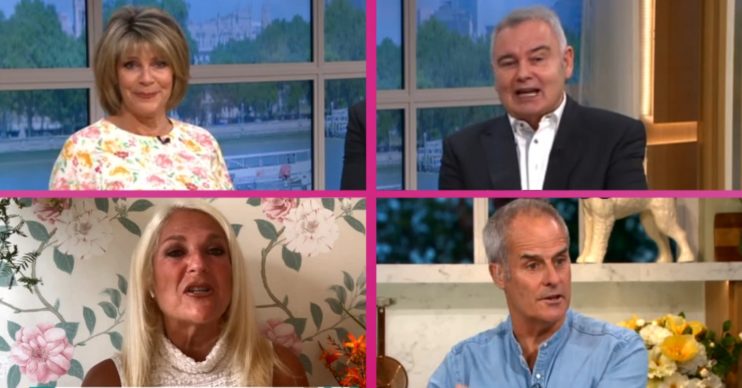 This Morning fans beg ‘boring’ show to get some new faces

Ruth Langsford and Eamonn Holmes were hosting, but what was on offer seemingly didn’t thrill those watching at home.

Who was on This Morning today?

Firstly, the show opened with a quirky discussion on Percy Pigs and the news they could be banned.

A Percy Pig ‘superfan’ appeared and said he’d be devastated if he couldn’t get his favourite sweet treat any more.

Meanwhile, the hosts then moved the debate to one about campervans. The question was whether they make a good holiday or a bad one.

Michelle, who loves campervanning, and Tanith who hates it, phoned in to discuss the pros and cons.

Viewers were by this point beginning to lose the will with the show.

Other segments included Vanessa Feltz hosting a phone-in on repairing broken friendships. It was a double dose of Vanessa, who had earlier also appeared on This Morning’s View

Kelly Hoppen was on to advise people via video link about how they could spruce up their dull interiors.

Phil’s cookery section was under fire. They felt he’d made an Arctic roll on the show countless times before.

Several ITV watchers complained that the show needed to get ‘some new faces’. They say they’re fed up of seeing the same old people over and over again.

Other viewers just thought the whole show was boring.

The section on campervans was called ‘awkward’. Dr Ranj also appeared to discuss summer hazards for kids and many found that ‘boring’ too.

Who will present This Morning on Friday?

Eamonn and Ruth are stepping in for Holly Willoughby and Phillip Schofield Monday to Thursday. Their usual Friday slot is therefore being filled by a number of different presenters.

The last two weeks have been covered by Rochelle Humes and Ore Oduba.

Tomorrow (Friday, July 31) Rochelle will be joined by Dermot O’Leary.