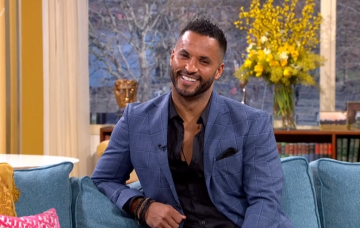 Even Phillip Schofield had something to say about it!

Former Hollyoaks star Ricky Whittle stopped by This Morning today to discuss what he’s been up to since leaving the soap nine years ago.

Since leaving his role as Calvin Valentine, Ricky began a career in Hollywood and currently stars on US show American Gods.

However, while listening to Ricky speak on the daytime show, many viewers spotted that his accent has developed an American twang.

Speaking about his love for keeping fit, he said: “I like playing sports but I am no longer allowed to play sports because I have to…”

Phil cut in: “Watch the face,” to which Ricky replied: “Yeah. Not the money-maker.”

Poking fun at Ricky’s new accent, Phil said: “You are really very LA now. You just can’t help it,” as he did an American accent.

Ricky revealed: “I say sidewalk. I so say elevator.”

And Phil wasn’t the only one to pick up on Ricky’s slightly different accent.

Viewers were left scratching their heads over his American twang.

One person said: “Ricky Whittles accent is up and down more than a yo-yo,” while another wrote: “What’s going on with Ricky Whittle’s accent?”

A third added: “What the chuff has happened to Ricky Whittle’s accent? He sounds Welsh with something stuck in his throat.”

What the chuff has happened to Ricky Whittle’s accent? He sounds Welsh with something stuck in his throat #ThisMorning

A fourth tweeted: “Why is Ricky Whittle speaking with American twang? He’s only been filming there 2 years.”

Why is Ricky Whittle speaking with American twang? He’s only been filming there 2 years @itvthismorning

Read more: Grandmother breaks down in tears on This Morning discussing ‘ageist’ sacking

During the chat, Ricky said he thinks he’s funnier in the UK than America because the people over there don’t get him.

He said: “They don’t get me! They don’t have sarcasm. I am much funnier here.”

When asked if he misses the UK when he’s in the states, Ricky added: “My family and friends come and visit me all the time in America because it’s a great holiday destination.

“I live on the beach. It’s fantastic. I watch more footie in America than I ever have here.”

What did you think of Ricky’s accent? Leave us a comment on our Facebook page @EntertainmentDailyFix and let us know!