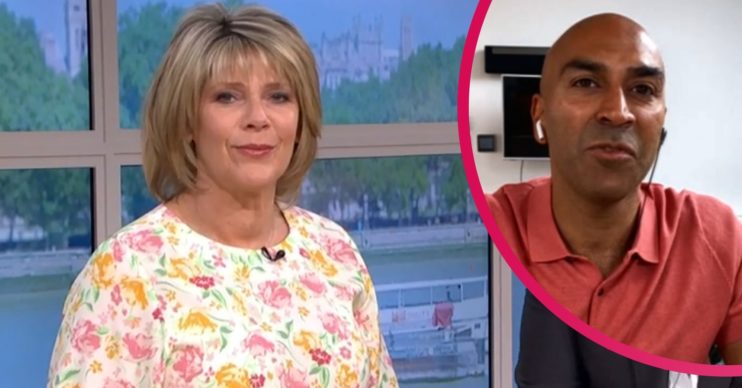 She revealed Amar Latif had made the final

This Morning fans weren’t happy with Ruth Langsford after accusing her of ‘spoiling’ the result of Celebrity MasterChef.

Read more: This Morning fans want the show to get some new faces

Ruth praised Amar for his appearance on the cooking show.

After he made a joke about his eyes, Ruth said: “For people who haven’t seen Amar before, he is blind.

“He’s the most incredible person because not only is he on MasterChef, which is amazing, but he’s now through to the final of MasterChef.

“I was watching you last night, we talked to you before you went on the show, Amar, and I’m just in awe.

“Last night you were cooking for 100 people, and the pressure was on and there you were filleting fish and you can’t see. It’s been unbelievable watching you.”

Ruth told him: “You’re very modest and we’ll definitely be watching tonight, spurring you on.”

Why were This Morning fans unhappy with Ruth?

Ruth seemingly spoilt the result for many of those watching at home because the second semi-final hasn’t aired on BBC One yet. Therefore, the three finalists have not officially been confirmed.

The Apprentice star Thomas Skinner was sent home by Gregg Wallace and John Torode, but there are seven people still in the competition.

Tonight, a double bill will air, with the next semi-final on BBC One at 7.30pm, followed by the final at 8.30pm.

The contestants left will be whittled down to just three for the final.

This Morning viewers called Ruth out on ‘spoiling’ the result for them.

One wrote: “Of course Amar latif has to be doing This Morning’s View obvously fueling rumours that he has won #celebritymasterchef don’t make it too obvious #ThisMorning.”

Others added: “Thanks for the spoiler, Ruth,” and “Spoilsport”.

Thank you ruth for spoiler not watched last nights masterchef, was gona watch it after watching this morning..

Anyone notice that Ruth said that Amar is in the final of Celebrity MasterChef? I thought there’s still ANOTHER semi-final to go?! Way to go, spoilsport. #ThisMorning

Woops thanks for the spoiler Ruth it's only the 2nd semi final. Thanks for ruining it for me @RuthieeL #ThisMorning

Of course it’s highly possible that Ruth just got her words mixed up and meant the semi-final.

However, it’s unclear whether either Amar or Judi make the actual final or if both presenters just got the wrong end of the stick.

Celebrity MasterChef airs tonight at 7.30pm and 8.30pm on BBC One.