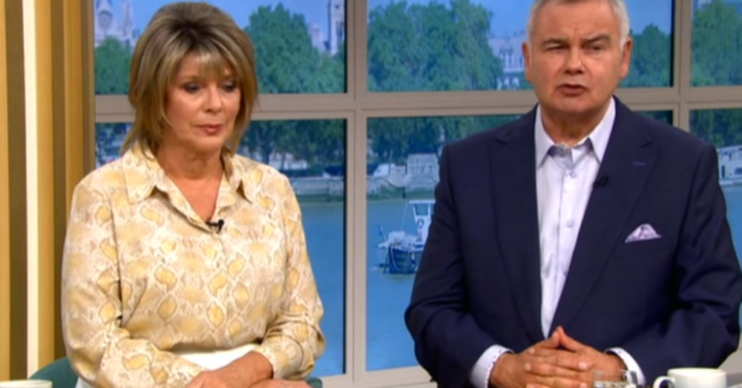 They asked about haircuts and holidays

This Morning viewers have hit out at Ruth Langsford and Eamonn Holmes for their line of questioning to Health Secretary Matt Hancock.

Mr Hancock appeared on the morning show to discuss the launch of the UK’s new track and trace system to tackle coronavirus.

The new system sees anyone testing positive for coronavirus being contacted and asked to log who they have been in close contact with. Those people will then be asked to isolate for 14 days even if they don’t have symptoms.

Ridiculous question on This Morning

However, after a few questions about the system, the This Morning presenters moved on to other things, including asking Mr Hancock whether we’ll be able to go on foreign holidays in July.

Mr Hancock suggested he “wouldn’t rule out” holidays in July, but he didn’t want to commit.

But it was Ruth’s repeated questions about hairdressers being allowed to reopen that really annoyed people!

She admitted she “didn’t mean to be glib” by asking when we’d be able to get our hair done again, insisting she needed her roots touching up as much as anyone else.

After suggesting they use protective equipment, social distancing from other clients, and don’t have anything to eat or drink while there, Ruth said she felt it could be made safe.

Mr Hancock told her: “It’s a challenge, but not an insurmountable challenge. We’re working on what it would look like to have protective equipment in place.”

He also joked his wife had cut his own hair after he was inspired by Phillip Schofield’s online video in which his other half trimmed his locks.

But fans still didn’t see the funny side of any of it, and suggested Ruth and Eamonn should be asking more hard-hitting questions about the UK death toll.

Really disappointed in Ruth and Eamonn. This government have completely shafted us. Read the room guys, you should have ripped him a new one #matthancock #ThisMorning

Oh my word, Ruth going on about haircuts on This morning is doing my head in.. saying it’s the same as getting on the tube so can they open on June 15th… not quite the same thought is it! 🙄 #ThisMorning

It’s nice to see that Eamonn and Ruth got to the heart of the issue: holidays and haircuts #ThisMorning pic.twitter.com/E0tdR9RKhz

Ruth is quizzing Matt Hancock harder on when hair salons will open than anything about the finer points of this new app or the “do as we say, not as we do” attitude of this Government. #ThisMorning

Oh my god! Haircuts? Ruth I love you, you know that, but come on! People are grieving the loss of their loved ones! 🤬 #ThisMorning

Haircuts are being asked yet no mention of the UK having the highest excess death rate in the world to the Health Secretary…? #ThisMorning @thismorning

Eamonn did address the ongoing Dominic Cummings saga, and asked whether the government could expect people to adhere to what was being asked of them after Cummings seemingly broke the rules.

Mr Hancock insisted that whilst he did have the powers to enforce this, he was hoping he didn’t have to use them and that people would do this voluntarily as part of their “civic duty”.