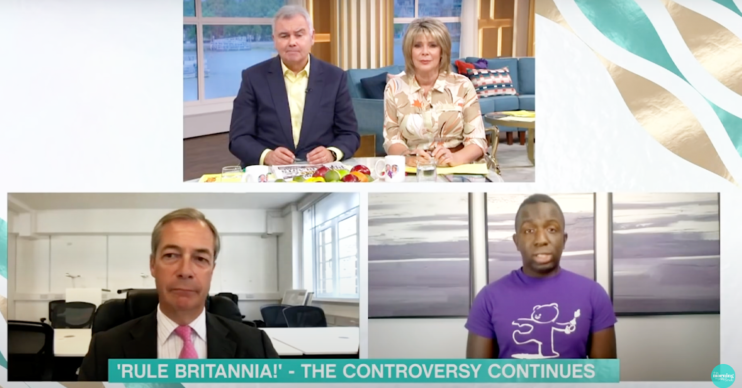 Eamonn was accused of 'ganging up' on BLM activist Femi Oluwole

ITV’s This Morning is reportedly facing an Ofcom investigation after 350 people complained about a fiery debate on the show.

The incident took place when Eamonn Holmes and Ruth Langford were hosting This Morning last week.

The show, on August 26, featured a segment on the BBC banning Rule Britannia and Land of Hope and Glory being sung at the Last Night Of The Proms.

What did This Morning viewers think of the debate?

And the chat didn’t go down well with viewers at home.

The Sun claims that 350 viewers complained to industry regulator Ofcom about the segment.

As a result, it’s reported that This Morning will now face an investigation over the Last Night Of The Proms debate.

You were booked on this show today to talk about your objections to Rule Britannia and Land of Hope and Glory.

During the show, both Eamonn and Farage challenged Oluwole, with the latter calling him an “extremist”.

The comment was in retaliation to Oluwole’s comments that Prime Minister Boris Johnson only waded into the debate to “provoke a culture war to distract from everything he’s done”.

He also said that “most people don’t care” about the songs, which have links to the British Empire.

Oluwole also complained that he kept getting “shut down” during the debate, with host Eamonn firing back.

“You were booked on this show today to talk about your objections to Rule Britannia and Land of Hope and Glory.

“Now, if you don’t have objections to them, let us know,” he said tersely.

Eamonn later read the words to the Irish national anthem and asked Oluwole if he had a problem with the use of the word “slave” in the song.

Social media instantly erupted and accused the twosome of “ganging up” on Oluwole.

Others said it was “excruciating” and branded it “horribly uncomfortable to watch”.

Hundreds of This Morning viewers clearly felt the same, hence the complaints.

Ofcom revealed it was the most-complained-about TV moment of the past week.

Earlier today, the BBC reversed its decision to ban the songs.

They will now be sung at the concert at the Royal Albert Hall.