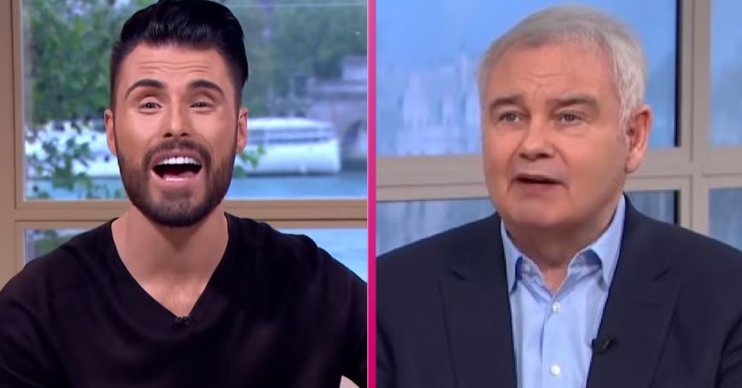 Is Rylan returning to the This Morning sofa?

Rylan Clark is reportedly in the running to replace Eamonn Holmes on the This Morning sofa.

Last week it was reported that Eamonn, 61, was bidding farewell to the ITV daytime show after 15 years.

Reports claim the veteran broadcaster will front his own show on the recently launched GB news channel instead.

Who will replace Eamonn Holmes on This Morning?

And fan favourite Eamonn recently spoke about his worry that he would get cancelled or sacked.

He said: “It’s a minefield. I worry all the time. I know I’m the most tolerant, caring, open-minded person. But that doesn’t stop me from saying that something is right or wrong or having a joke.”

So will Rylan Clark return to This Morning?

A source told OK! Magazine: “In a dream world, the show would love Rylan to come back.

“He’s a big hit with viewers and had a great rapport with Rochelle Humes when they presented the show together in 2019.”

However, back in 2019, Rylan hit out at former colleagues and rumours began swirling it was about his ITV co-stars.

Read more: Rylan Clark reassures fans about his wellbeing amid reports he was ‘offered a year off work’

At the time, Rylan told Closer magazine: “People always ask me if I’m best friends with everyone I work with in telly – but no, not everyone you work with is your friend.

“What’s the point of pretending you’re mates with everyone? Some of the people I work with talk to people like [bleep].”

He has never shed light on who he might have been referring to or from which show though.

Would you like to see Rylan return to This Morning? Leave us a comment on our Facebook page @EntertainmentDailyFix and let us know what you think of this story.