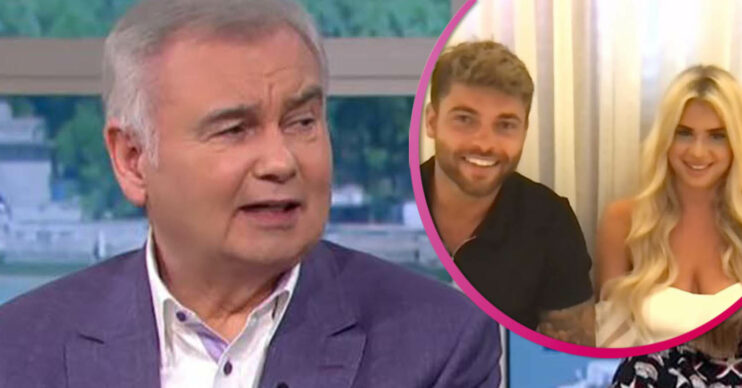 This Morning host Eamonn Holmes has been criticised for an “awkward” question to Love Island stars Liberty Poole and Jake Cornish.

Liberty and Jake left the villa last week after deciding to go their separate ways following a turbulent time in the villa.

On Monday, the former couple appeared on This Morning to discuss their decision to quit the show.

Eamonn Holmes on This Morning

But Eamonn couldn’t resist but ask an intimate question to the pair.

He asked: “Are you two not tempted to have a little cuddle, a little kiss?”

The pair looked stunned as Jake said: “Who me and Lib? What now?”

Viewers were left cringing over Eamonn’s question and shared their thoughts on Twitter.

One person said: “Eamonn has just made the end of that interview hella awkward.”

Another added: “Why did Eamonn have to make them both so uncomfortable? That was horrible to watch.”

A third tweeted: “Eamonn made that so awkward omg #ThisMorning.”

Meanwhile, Jake and Liberty opened up about their breakup.

Jake said: “There just came a point where we were at a halt. I’m quite glad she put it on me to be honest because I didn’t have the bite to do it.”

Eamonn then asked: “Is this the end of ‘Jiberty’ or could there be a resuscitation going on?”

Jake admitted: “I feel it would be a lot easier on the outside but I don’t know. We haven’t spoke really or about anything.”

He added: “I’d like to think so but it takes two to tango.”

Liberty said: “I think I definitely made the right decision in there for me at the time.

“There’s no animosity there and we still get on really well.

“You can never say never because you don’t know what’s going to happen in the future but for now we definitely made the right decision.”