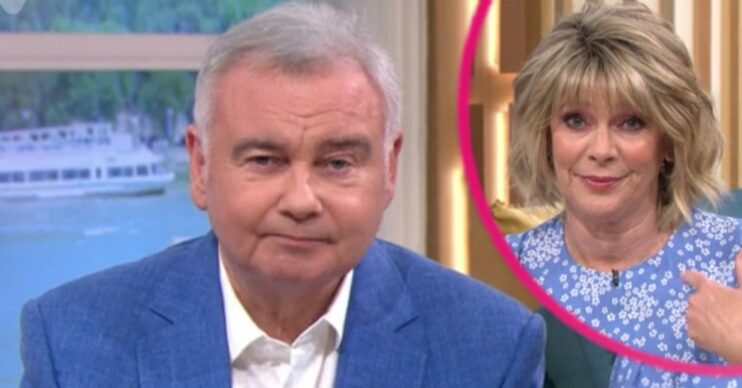 This Morning: Eamonn Holmes compares his manhood to a pineapple after turning down nude calendar

This Morning host Eamonn Holmes made a cheeky comment about his manhood during today’s show.

The presenter appeared alongside his wife Ruth Langsford on Tuesday, where the pair were joined by soap correspondent Sharon Marshall.

During the episode, Dev’s son Aadi is left horrified after fearing his dad’s private parts had not be edited out of the calendar.

However, the shopkeeper went on to reveal the object in question was in fact a “hairy kiwi”.

After showing a short clip, Eamonn and Ruth giggled over the funny scene.

Read more: This Morning: Eamonn Holmes reveals he could become a grandfather ‘today’

Speaking to Eamonn, Sharon then asked: “Would you do it here? I don’t know how much fruit we’d need?”

Eamonn, 61, went on to pull out a reasonably sized gold pineapple prop.

The TV star added: “I have to say, do you have any pineapples? Maybe something like that?”

And Eamonn didn’t end there.

He went on: “I was asked to do one of those calendars once. It was a rugby – I had to cover myself with a rugby ball!

I have to say, do you have any pineapples?

“I think it was for testicular cancer, do you want all the gory details?”

Following the segment, one viewer tweeted: “Eamonn would be great on a charity calendar #ThisMorning.”

He opened the programme with the announcement his son, Declan, had welcomed his first child.

Read more: This Morning host Eamonn Holmes hits back at complaint over political ‘practice’ on show

Sharing the news, Eamonn said: “My son Declan and his wife Jenny, they’re the happy couple. Jenny gave birth to Amelia, who is 7lbs and 6 ounces.

Eamonn also said he preferred the name ‘Papa’ and insisted he’s “too young to be a grandfather”.